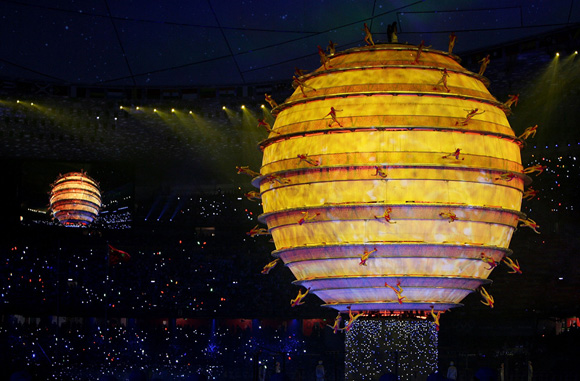 I’m sorry, guys. This is still the mother of all live events.

I knew going into it that Zhang Yimou would have amazing visuals, but what he delivered- I don’t think I could’ve ever imagined could be possible live. Of course, if the reported $+100M USD (some reports even say it was $300M) are true, it would make some sort of sense.

Each and EVERY frame on that ceremony is worth marveling at, even with every photograph that came out of that event- it was breathtaking [1][2]. It almost looked like it was so beautiful that no bad photograph could come out of it. I really couldn’t pick one single photograph that would represent the whole event since all the pictures (to me) were all iconic. From the rows and rows of drummers, the Confucius followers, the ink dancers, the green-tight-filled-with LED dancers that formed the human Bird’s Nest around a piano-playing Lang Lang- it was all too perfect.

Still. I know, I’m a realist. With a monster budget, this one is gonna be super hard to top, and really- I don’t think anyone is going to be expected to top it, except if China gets another bid.

China is going to be the one that needs to be afraid of its own Opening Ceremony. xD 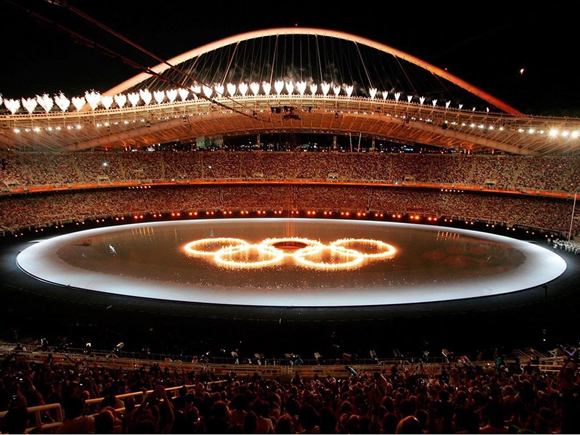 I am rather shocked everyone talks about the ballooned Olympic budget in Athens, which skyrocketed to nearly $15Bn USD, but no one mentions how much of that went into the Opening ceremony — everyone does point out that $1.2Bn went to the security after 9/11.

Highlights of this show include the stage filled with water xD the drumming battle across time, which culminates in the ignition of the rings shot shown above. In fact, the first ten minutes of that opening is near perfection.

Then there was the cube/human body/ splitting parts that became digital panels, there were lasers involved, a lot of out there stuff with mathematics and DNA xD which included a voice cameo of Maria Callas~~~ Nothing can go wrong with a Maria Callas mention.

There was Bjork, of course. xP

I had a bit of trouble ranking this one against Vancouver, but I think the first ten minutes of this ceremony edges out Vancouver by… like a line. So there you go. 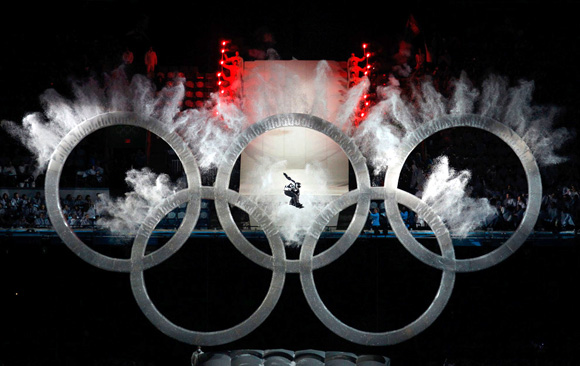 Vancouver had the intimidating task of truly following up on Beijing footsteps. Back then it was only 2 years since that had happened~ And see… it isn’t about the budget, since Vancouver spent $38M on its ceremony that included this iconic snowboarder jumping through the Olympic rings shot, and a marvelous digital display sequence with the digital ice cracking showing the killer whales swimming and the story of the First Nations [1][2]. 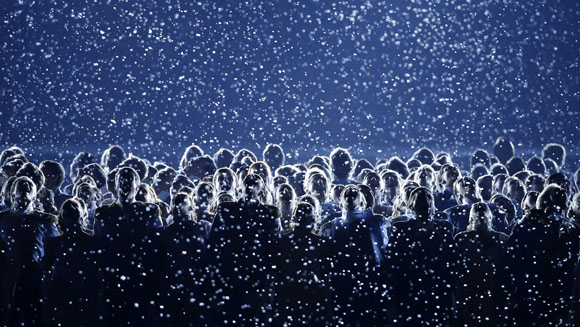 Well, it was a VERY Russian night full of drama, loads of theatrics, classical music, some ballet and contemporary dance. In terms of cultural experiences, Sochi delivered — despite the snowflake glitch that everyone is loving — in a way that only the Russians could. With an undetermined budget for the show (everyone likes to point out the Olympic overall budget is between 37-50 Billion Euros [1]), Sochi presented us Russian history like we hadn’t seen it before.

I know nothing of ethnicities in Russia, but I’m pretty sure there were some Samoyedic people (at least in attire) and others in the first sequence of the different regions of the country, the formation of the Russian empire — digital displays and all — that reached its height with the whole Anna Karenina (I’m pretty sure) bit that transitioned to the iconic train (tinted in dangerous red) that gave way to the Russian revolution.

At times, the show (without narration) went over my head with metaphors and its pace. It reminded me of some heavy-handed Russian movies, in contrast to the more relaxed nature of the Vancouver games, but it still display some of the more artistic aspects of the show in Sydney with its own very Fantasia meets Alice in Wonderland sequences. [1]

Also, they’re the first to treat the athletes like spectators and let them sit to enjoy the show. Bonus! 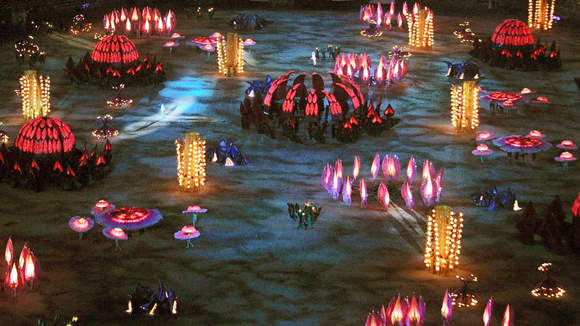 I think the Sydney 2000 Summer Games broadcast had some of the same issues that London did~ CUT: Random audience shot. Sometimes it was an audience sweeping shot, which was alright, but some others they really went for the bored audience close-ups.

Can never get a break~ xD

Highlights of this show include the Nature sequence (shown above), which had performers in dreamy fantasy flower petal outfits very much like a Fantasia musical sequence, combining Australia’s flora and fauna, and kudos for using very aggressive settlers — complete with scary metal dragon and corrugated tin — breaking the Nature sequence. Then there was the Arrivals sequence with all the foreigners that got there to form what Australia is in present day, and the humongous Olympic band and their massive formation.

Then… dude! The Australia industrialization has tap-dancing workers. LOL 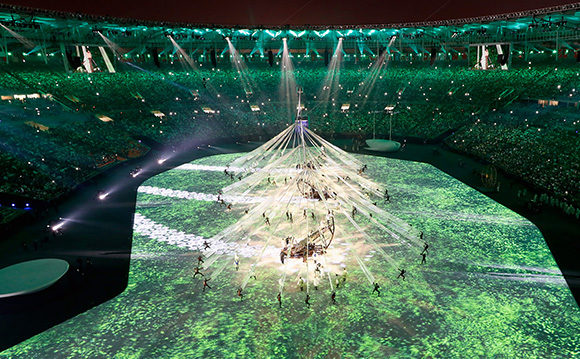 I’m sorry, you guys~ there were not many feelings there. However, there was much more spirit than London’s. My favorite moment of the night was how Fernando Meirelles managed to include colonization and the slave trade into their show. The digital display there was a little messy for my taste, but I enjoyed they managed to include the native Amazonians and not only the Portuguese ships, the African slaves, but also the Middle Eastern migration and the Japanese migration. Noticed a lot of brown-face and yellow-face in the sequence, but the intention counts.

My favorite digital display was the modernization of Brazil, with the rising buildings projected onto the floor for the fake parkour segment. There were far too many pre-prepared videos included for my taste (the one segment after the Olympic speech, which featured Ayub Ogada’s Kothbiro [Zing! Meirelles’ The Constant Gardener] to introduce Kipchoge Keino (this is all on the IOC wanting to include the laurel award ceremony in it), and it relied too much on dialog at times.

Super extra points for budget constraints, though! Plus~ cherry on top Samba! The Olympic cauldron was also very nice as a general shot. 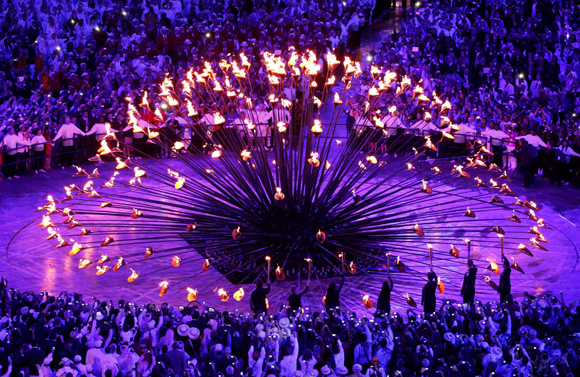 I know people have been crazy about the burning-metal glowing Olympic rings [1], since ALL newspapers have been using that photo alone as the image of the Olympics on their covers. But to me — the moment that said “this is the Olympics and not an over-budget episode of Dancing with the Stars” or “this is who the MTV Video Music Awards should invite to perform at their show” — it was this moment.

The Olympic petals had a great meaning behind it. It was symbolic, it was about the unity of the spirit. It was THE moment, and the most beautiful to look at.

The rest of Danny Boyle’s show? I’m sure it would have been awesome being there and seeing everything that was going on, but as a live broadcast? It was awful, I’m sorry, Danny. But your show was awful. It had choppy editing, it was all over the place in concept. It looked cheap as a cultural event, but it looked amazing as a pop culture blip that’s going to get mentioned on a Family Guy episode or be featured on Shrek 25: The Great-grandsons of Faraway.

Those little close-ups of people’s feet with stylish depth of field as important things were going on stage, as well as random shots of the musicians instead of showing what’s on stage. Danny, if you thought it was important to showcase the musicians playing the music, you should have included a sequence where the musicians were the center of attention.