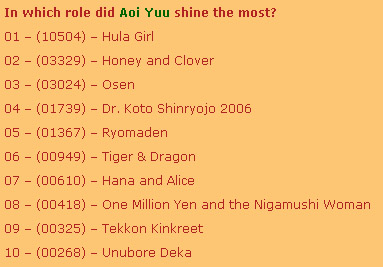 What is Yu Aoi's Best Film Role? Not your favorite, her best~

Now, we’re talking about her best role, not your favorite role. I’m not counting best tv role… because it’s just too much to take into account.

4 responses to Random Web Polls: In which role did Aoi Yuu shine the most?