Sincerely, this has been Glee’s best episode of the 2nd season so far. We learned a bit from the characters, and the music didn’t take over. There was plenty of funny moments. However, I’m lazy – so this might be my last Glee Quote of the Week. Picking a quote each week is turning into “oh I don’t know what to pick” so it actually takes a lot more time than it did before.

With this post, I want to get off the hook in case I find it difficult next week.

Julie Andrews needs to be Kurt’s grandma, or auntie after his fierce number of Victor/Victoria. And talking about “aunties” – Tina, ain’t nothing wrong with dim sum. Or chicken feet. The Asian in me really wanted to use the chicken feet quote… because I can’t imagine salad with chicken feet. LOL

Having said that. What a gay episode. Rachel and Kurt are meant to be fag-hag and main-gay together. Brittany did Lady and the Tramp, but she had no one. Artie’s being a bitch. But the biggest bitch of all is Santana. The difference is that I like bitch Santana, and I think Artie’s just being a jerk. He’s all like “poor me, you took advantage of me”. Suck it, Wheels!

BitchSantana may be a major bitch, but still ain’t bitch enough to battle the biggest bitch of all. Santana meet Nicole Julian – I think you’re both known as Satan in your respective universes. 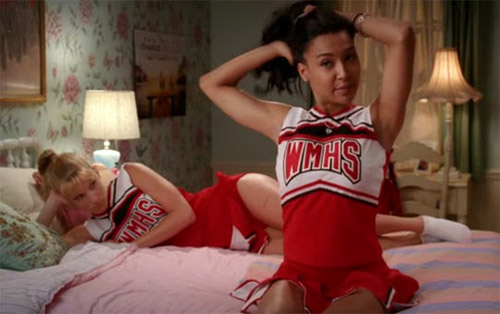 I’m like a lizard. I need something warm beneath me or I can’t digest my food.

I like that she doesn’t take offence in comparing herself with a lizard. xD