When the first Avatar trailer went up, I asked myself what was that rubbish. Yes, it looked that bad to me. However, I must admit that seeing it on 3D was an experience very close to that of The Terminator show at Universal… after all, both are James Cameron.

This is the first time that I’ve felt that a 3D projection does justice to its 3D medium, and doesn’t just make objects pop out of the screen just because it can. Instead, Avatar pulls you in – in some scenes more than others – and lets you become almost part of it. There’s a scene in particular, in which the antagonist (Colonel Quaritch, played by Stephen Lang) looks through the rear-view mirror and sees himself. The way it was shot makes it seem like WE are there until Quaritch’s reflection hits us back. Is Cameron telling us something? 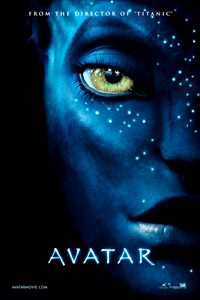 The thing about Avatar is that its nod for Best Picture Drama at the Golden Globe is gonna play against it. It was okay as a season Blockbuster, with crazy good-looking art (that doesn’t necessarily look as good on 2D as it does on 3D), however, throw in there a Best Drama nod and you’re placing this film next to others with other standards. What have you got when you strip Avatar of the 3D (which I already fuzzed over about), and the computer graphics? Okay actors, okay storyline, and okay-ish characters that resemble cartoonish versions of archetypes of the hero’s journey. A Best Director for Cameron? Sure! He made this giant mega-production work. A Best Picture Drama? Not so much.

The story is set on Pandora, in the fictitious satellite of Polyphemus, when Jake Sully (Sam Worthington) a paralyzed former U.S. Marine arrives to participate in the Avatar program which will let him transfer his subconscious to a specially-designed body that resembles a Na’vi, a blue humanoid group of natives from Pandora.

Sully alongside scientists studying the Na’vi culture (one of them Dr. Grace played by Sigourney Weaver) are sent to try and figure out how to deal with this society and move them out of this place because there is a huge concentration of a very valuable mineral in their land, and we want it for ourselves… even if it’s by force.

The acting is fine at times, cartoon-like at others. It’s got sincerely funny dialogs at times, cheesy dialogs at others. You don’t really feel much sympathy over the characters who are just there to look at, and its impossible to not crack some good jokes at the expense of some of the scenes.