Decided to do this one already! Just to get going… this goes all the way back to… Before Hana & Alice? 2003! A lot of faces on this one… you might recognize many~

About the film:
A 2003 film directed by Su-yeon Gu about a high school student named Hidenori Kaneshiro (Hayato Ichihara) who lives in Tokyo as a Korean-Japanese, who gets bullied for being half-Korean despite being raised Japanese. Because of this, he’s developed a reckless answer to life’s problems by not caring about anything in the real world… except maybe his sister. 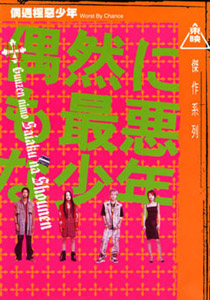 Is Japanese young society that effed up? This is my 2nd Hayato Ichihara effed up youth movie – Lily Chou Chou is messed up, non? – and Yu Aoi is also there… though~~ VERY small role on this one, like less than five minutes on screen. So if you’re in for her, skip this one.

Another question. Was this like a big budget movie?? Because I recognized many of the faces in the film… no that it’s a bad thing, but made me wonder how popular was this in Japan, or how popular it became~~~

The film, very much like Lily Chou, portraits the life of a student with problems in school (and outside of it). In this case, he’s been bullied for being only half-Japanese. I have no idea what the cultural connotation of being mixed race in Japan is, or if being Korean-Japanese is in some other level of issues [Out of Wind (Kaze no Sotogawa) being another one about this] – However, being mixed race myself, I couldn’t really relate to Hidenori’s issues or reactions to anything going in his life. Perhaps it’s my no nonsense, no bullshit way of thinking that made me shrug when I saw him shoplifting… etc.

Unlike the movie Go! (which I’ve mistaken for another film called Go!), Worst by Chance tries to place the blame on society and the parents – who are somewhat at fault – but they fail to place some of that blame on the young ones. One good smack on some of those smug faces didn’t do anything bad to anyone… just saying. Just as a good flip of the finger to those classmates and friends… no one really died for not caring for what their ‘friends’ say.

Despite all of what I have against the movie, I did somewhat enjoy Hidenori’s mildly twisted relationship with his sister, and the 2nd hour of the film when the whole ‘city-film’ turned into a road-trip. Mika Nakashima was pretty funny, though I didn’t understand her character either… or Yu’s. But she was barely in the film, so you can’t hardly blame me of that one. She sort of wrecks this room with paint, an electric guitar and pillows, then disappears to re-appear for the last 20min. and do nothing but put on make up to the dead.

Perhaps the main thing about the film for me was that it made me realize how small the Japanese entertainment industry really is. For example, Akira Emoto (whose son play’s Yu’s boyfriend here) has appeared on my fave Japanese film – Memories of Matsuko – with Mikako Ichikawa and Eita who’ve worked with Rie Tomosaka and Kimiko Yo on Atsu-Hime. Both of them also show up on this film for less than five minutes… Kimiko Yo has also appeared on Osen (with Yu) as Shizu-san, and Rie Tomosaka played Yu’s older sister in 1980. Plus, Yoshinori Okada has also worked on both Atsu-Hime and Osen. – Indeed, playing 6 degrees of separation is plenty easy in Japanese entertainment.

Favorite Scene: *sighs* again? There’s like… two scenes to choose from? LOL’ – Have to choose the one where she’s trashing everything in the room.

Here you go! Some posters and covers~