Some Teasin’ from Hayato Ichihara 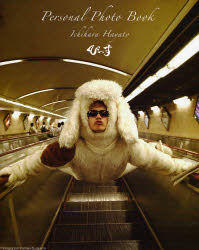 So… Hayato Ichihara also has a Photobook of his own. It came out in 2006 and it features photos by Yoshiaki Sugiyama of a 19-year-old Hayato… there’s even an image reminding us of his debut of All About Lily Chou Chou (in which he shared the screen with Yu Aoi)~~

Well, you can get his Photobook in here:
beNippon.com [minimum shipping $8 I think…]
YesAsia.com [free shipping when reaching $90 for International orders, and cheaper for US, Canada, etc]

The book features 90+ pages of Hayato being silly, included rabbit costume photos (like the one on the cover), making faces with an oba-chan, and even a naked butt…. LOL’

But don’t worry, it’s not only fun and games~~ there’s also some artistic shots of Hayato wearing his traditional Japanese clothing, some with a tux, and some very cool black and white shots. And I will be posting a teasing image… no, it’s not the butt. It’s a really nice shot of Hayato in Japanese outfit running up a stony set of stairs~~~

As with Yu’s Travel Sand scan, I’ve added some photo and PB credits~~ It’s a wallpaper sized 1680x1050px, there’s also a more ‘squarer’ version of it (fullscreen one sized 1280×1024) if you are interested. Just leave a comment either here or Flickr.