Look what I found! 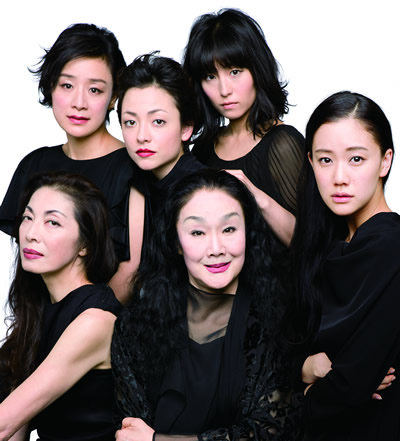 Yu-chan is going to be starring on the play Madame de Sade, which… I’ll just copy/paste the info I found because I’m lazy. LOL~ I know, I know~~~ But I compensate by adding all the dates on the Yu Aoi Google Event Calendar, alright?

The shocking content made its premiere in 1965 a “scandal,” and since then, the play has been praised internationally and drawing attention at every performance.

Paris in the deeply decadent mood in the late 18th century, where the absolute monarchy was at its final stage. Renée, Madame de Sade, holds on to faithfulness to her husband Marquis de Sade, who is full of grotesque scandals and is arrested and jailed repeatedly due to his reckless behaviors.

Madame de Montreuil, Renée’s mother who is concerned about honors and morals, schemes a plot to separate him and her daughter, but Renée is firmly decided and they severely confront each other. After the French Revolution, her husband is finally released from the jail. What is the truth hidden in the mysterious action that she takes then?

The six women, who interfere with and confront each other in spite of their dialogues in an incomparably elegant and ornate style, are played by actresses with vivid presence: Yu Aoi as Renée, Minami as Anne, Misuzu Kanno as Baronne de Simiane, Marie Machida as Charlotte, Rei Asami as Comtesse de Saint-Fond and Kayoko Shiraishi as Madame de Montreuil.

The director Mansai Nomura has long been attracted by and attentive to the exquisite style of Mishima. He has directed and played the leading parts in Machigai no Kyogen (The Kyogen of Errors) and Kuni Nusubito (based on RichardⅢ) that fused Shakespeare and Japanese traditional performing arts and Macbeth with a bold scenography and five actors. He won the Kinokuniya Theatre Award and Asahi Performing Arts Award with Atsushi—Sangetsuki, Meijinden that was based on novels by Atsushi Nakajima.

As an artist who embodies and inherits the 600-year tradition of noh and kyogen, he knows the sonic beauty of Japanese language and works on the play focusing on “bondage through words.”

More info on dates, times, and ticket prices over at the Setagaya Public Theater website.

I am… shocked. Cannot imagine Yu-chan playing the Marquis de Sade’s wife. I mean, the Marquis de Sade’s material alone is shocking. I would have never EVER figured Yu would be interested in that. But alas, she seems to be doing more work on stage, which I like (but bummed because I’m NEVER going to see her).

Also bummed, because I was not-so-secretly hoping to run into her in a Taipei night market. LOL TOUGH LUCK!