Great animation, and a story written by Katsuhito Ishii (who wrote and directed Taste of Tea) – AWESOME. 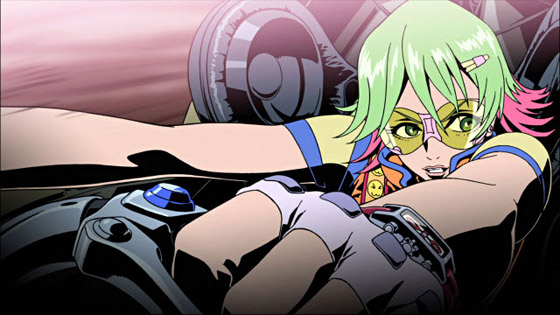 Synopsis: The toughest and the most destructive underground car race in the universe, REDLINE, has just begun! JP (Kimutaku) is a reckless driver oblivious to speed limits, and Sonoshee (Aoi), one of his competitors with whom JP is secretly in love with, is a hot girl determined to do whatever it takes to stand on the winner’s podium. In order to win the finals, they’re up against the craziest drivers with their heavily armed and awesome road-tearing vehicles. On top of that, during the race, they have to avoid military crackdown by the government because the race is actually prohibited in Roboworld. The only help JP wants is the engine obtained and custom tuned by his long time buddies, Frisbee (Asano) the mechanic and Mogura Oyaji the junk shop. While cars crash and burn into flames, the race course becomes a merciless hell and JP whips his ride into a dead heat. Who will survive to win in this mass-destruction race?!

all via Kawaii-Joyuu [except for clip].

That film is set for an October release.