To Watch Until They’re 35 – Natalie Portman

Surprise! Natalie Portman is not my #1 *shock* And I love Natalie Portman, I’m pretty sure I’ve been a fan for 10 years or so, that would mean I have been visiting NataliePortman.com for that many years.

I should get a medal or something…

Anyway, Natalie Portman is on #3 of my list of Actors to Watch Until They’re 35. Right next to Brother’s co-star Jake Gyllenhaal! Coincidence or conspiracy? xD 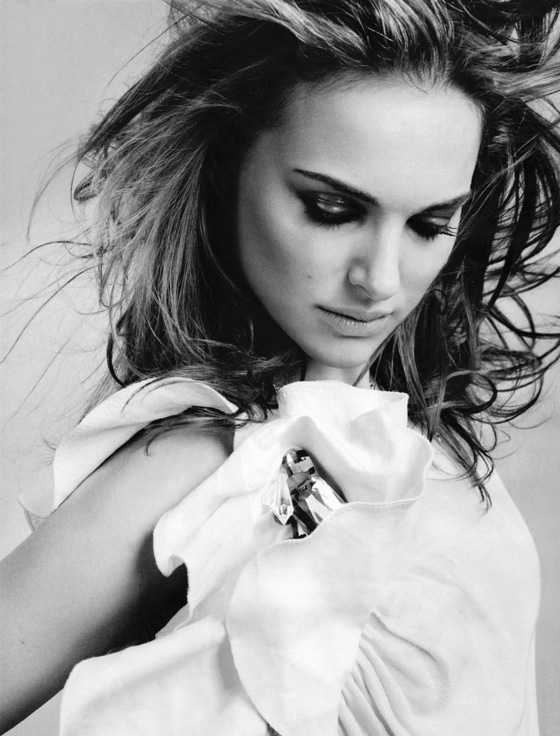 Born in Jerusalem, Israel on June 9th 1981, this 28-year-old actress is best known for playing Queen/Senator Padme Amidala on the Star Wars Prequel Trilogy — to the dismay of us fans — even though other people should know her better for playing Evey Hammond on the live-action adaptation of Alan Moore’s V for Vendetta, or the little assassin-in-training Mathilda on Luc Besson’s Leon (The Professional), or Alice on Mike Nichols adaptation of the stage play Closer, for which Portman earned nominations for Supporting Actress at the Academy Awards, the BAFTA, and other critic circles, as well as winning a Golden Globe.

Portman has had an unusual career, not only by being discovered at a pizza parlor to be a model, and instead getting a part on Besson’s Leon, which would turn into a breakthrough role for her — besides turning into a cult hit, and becoming one of Portman’s most memorable performances — grow up in the limelight and surprisingly have quite normal formative years attending high school and then university. I mean, not many could say that they’ve worked with Michael Mann (Heat) alongside  Al Pacino and Robert de Niro, Ted Demme (Beautiful Girls), Woody Allen (Everyone Says I Love You), and Tim Burton (Mars Attacks!) before they graduated high school.

She then signed on to the Star Wars prequels, in which she would play the would-be mother of iconic characters Luke and Leia. The project spanned through her early twenties, starting in 1999 with the release of The Phantom Menace, until 2005 with the release of Revenge of the Sith. Between those projects, she came up with a broad variety of films, starting with the slighly-more-grown up Anywhere But Here by Wayne Wang starring with Susan Sarandon in 1999, following that up with Where the Heart Is, a tad more mature light drama with Ashley Judd and Stockard Channing in 2000.

The roles and projects began escalating in intensity in 2003 when she played a small part on the epic film by Anthony Minghella, Cold Mountain, with Jude Law and Nicole Kidman. Finally in 2004, two of her most critically acclaimed projects were released. First up, Garden State written and directed by Zach Braff, and Mike Nichols’ adaptation of Closer with Julia Roberts, Jude Law and Clive Owen. Suddenly, Portman was everywhere during award season with nominations here and there, and some wins.

After the final Star Wars film in 2005 and studies abraod, Portman was back with smaller films of more serious flare like Free Zone with Hiam Abbass, as well as more popular commercial work with V for Vendetta adapted by the Wachowski brothers and starring alongside Hugo Weaving, Stephen Rea, Stephen Fry and John Hurt.

In 2006, Paris Je t’Aime was finally released in Cannes and festival circuits, the collection of short films included one by Tom Tykwer titled True. There were also other interesting collaborations with Goya’s Ghosts by Milos Forman (Amadeus) alongside Javier Bardem and Stellan Skarsgård, as well as a role on Wong Kar-Wai’s (In the Mood for Love) English debut My Blueberry Nights, and her much-talked-about collaboration with Wes Anderson (The Royal Tenenbaums) on the short film Hotel Chevalier, which was the prologue to the film The Darjeeling Limited in 2007, as well as Mr. Mangorium’s Wonder Emporium by Zach Helm (Stranger than Fiction) with Dustin Hoffman.

In 2008, Portman tried her chances with the period piece with telenovela drama The Other Boleyn Girl, based on the book by the same name, playing Anne Boleyn opposite Scarlett Johansson (as her sister Mary) and Eric Bana (as the King). However, the most exciting news were when it was announced that Portman would sit on the director’s chair, first on the short film Eve starring Lauren Bacall, Ben Gazzara and fellow the 20 to Watch Olivia Thirlby, and then on a New York I Love You segment.

Of course, besides writing and directing shorts, Portman has also put on the producer hat with films likes Love and Other Impossible Pursuits based on the novel by Ayelet Waldman, alongside Lisa Kudrow, as well as Hesher written and directed by Spencer Susser, and playing opposite Joseph Gordon-Levitt… which are set to be released sometime this year. In the meantime, Portman released Brothers late last year, based from the Danish film of the same name, and directed by Jim Sheridan (In the Name of the Father, In America) opposite fellow the 20 to Watch Jake Gyllenhaal and Tobey Maguire.

What’s in store for the rest of 2010? Well, besides from the small releases for Impossible Pursuits, and Hesher, there’s the Darren Aronofsky (Requiem for a Dream, The Wrestler) film Black Swan. Starring Portman with Mila Kunis, Winona Ryder and Vincen Cassel – the film is promising enough to get very early Oscar buzz.

And if that wasn’t enough, there’s the sketchy romantic comedy Ivan Reitman Untitled Project (which was previously known as F*ck Buddies or Friends with Benefits) with Ashton Kutcher – okay… ? – and Kevin Kline. And there are also plans on Pride and Prejudice and Zombies by David O. Russell (I Heart Huckabees), which is also being produced by Portman. You can’t really say she doesn’t have variety on her CV now.

Yeah, okay… we’re excited about Black Swan the most, but who knows what a few months would do to our desire of wanting to see more of Portman.

8 responses to To Watch Until They’re 35 – Natalie Portman