I saw it yesterday in the morning, and I was very surprise to actually find out it was going to get release here. I was already getting used to the idea of watching it on DVD or cable. 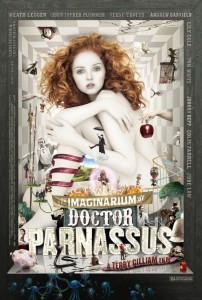 Where can we begin talking about Gilliam’s Doctor Parnassus? If you are a Gilliam fan who are into the bizarre worlds Terry creates, you might not feel as comfortable watching it, as it is a pretty straight forward story… even if it stretches your imagination.

Parnassus is BEAUTIFUL to look at, but can you expect less from Gilliam’s visual style? Parnassus tells the story of a man… called Doctor Parnassus (Christopher Plummer) whose pacts with the devil disturbs his routine of trying to make a living with his street performers bunch, including his friend Percy (Verne Troyer), his daughter Valentina (model Lily Cole), and Anton who is madly in love with her.

I don’t really want to say much else about the plot, because the plot worked for me because I had only seen that one trailer. I didn’t know anything else, so I’m not going to spoil anything else for those who haven’t been following their Parnassus news.

The film received mixed reviews – though, mostly positive ones – and I have seen many who thought Tideland was so much better, and I’m the opposite. I liked Tideland, but not as much as Parnassus, maybe because the story is much more linear, and the characters are less gruesome. It’s more like a dark fantasy adventure. More my cup of tea.

Plummer is excellent as Parnassus throughout his lifetime, and as for Heath Ledger’s final performance? It was fine, it wasn’t a brilliant farewell performance as The Joker would have been, but it worked for me. The inclusion of Johnny Depp, Jude Law and Colin Farrell into the story as the different faces of Ledger’s character was great. I don’t know if the idea of “different faces of the character” was already worked out into the concept of the story and was going to be executed differently, or if it was added at the last minute due to Ledger’s passing.

I think the film could be a solid release for many, and could be pretty commercial, right? I mean, women are going to see it at least for Johnny, Jude, Colin and Heath? Plus, the distributor is taking a chance on bringing a film that opened in limited locations in America. Big props to them for doing it. 4/5

2 responses to Doctor Parnassus is Horrorific