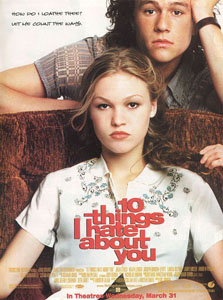 Today I was re-watching BBC’s Shakespeare: The Animated Tales… particularly Macbeth and The Taming of the Shrew. Despite it’s misogynistic theme, it reminded me of the teen comedy 10 Things I Hate about You~~

How do I loathe thee? Let me count the ways.

Some time in 2003, on one of the many Writing classes I had, we got to ‘study’ the script for this film, which I had seen back when I was 13 or 14. I’m almost sure that I saw this film at the theaters… oh the times! And oh how innocent were teen comedies back then~~~

Anyway, back to the topic~ my teacher pointed out that the film was a modern adaptation of Shakespeare’s Shrew~ Back then I thought, WOW! That’s so cool. LOL, she also mentioned at how much the script sold, and I was most impressed. Hahahaha~~

For those not so familiar with the film, or the Shakespeare story… here are some of the references:

You can check more references here.

It’s so hard to imagine that the film is already 10 years old!! – Turned 10 about 20 days ago on March 31st – and that this film was the American debut of Heath Ledger (RIP) who’s got a remarkable career with great films… awards *sighs(, Joseph Gordon-Levitt has a broad array of films as well more on the indie flare – and whatever happened to Andrew Keegan? I’m pretty sure he used to date LeAnn Rimes, whom we all know what’s going on with her~~

Julia Stiles had a breakthrough with this role, and had a bunch of films out during those years, but eventually just settled for lesser roles. I did enjoy seeing her on The Bourne Trilogy~~ and Larisa Oleynik~~ I read she was seen on Without a Trace, but I don’t watch the show so can’t tell. I should go on the hunt for a few Oleynik flicks. Gabrielle Union is doing a big better on the more “commercial” work, as I’ve seen a few projects with her. Not really MY type of films, but she’s been active.

I wonder if someone would be interested in a “collector’s edition” of this film. Would like to see them together…

How do you feel this film is aging? I think it’s okay… I had a laugh watching it this afternoon. I was surprised how innocent it is compared to teen films now. I don’t know if I can call this the best teen romcom of the 90’s (or the last 20 years?), but perhaps… I could do a bit more research.