Ok, I admit it. I went to watch The Dark Knight today with my The Joker tee. Call me a crazy fangirl! xD Long story short, me likey. Go watch The Dark Knight this weekend, it won’t disappoint. Word. It’s dark, it’s serious… has action, gets you to the edge of your seat. And yes, the main attraction will be Heath Ledger’s freak interpretation of messed up The Joker. Okay! SPOILERS AHEAD! <-that’s a warning, I still don’t know how much spoiling I will write. 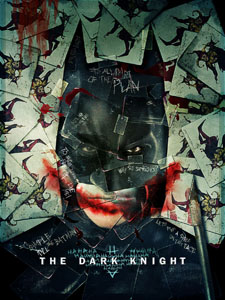 So the film opens with a cool (as in cold) misty fiery thingy. I don’t know where that one came from, but it soon cuts to a clear shot of what’s going to be The Joker’s first BOOM. Yes, the mafia banks are being strategically targetted by the good and bad guys. We get our first look at Heath right at the beginning. He really does freak me out… the make up, the voice, the body language.

Okay… I’m side-tracking here. The story centers on how Batman has been dealing with crimen in Gotham, and how he’s been affecting people. Complete goofs who dress up like Batman with their hockey pants to fight crime… to the mafia and their desperate attempt to try to get what was theirs… to just simply psychotic. It also affected the ordinary… would you kill to save your own life?

Nolan also sets it nice for the bad guys… The Joker is joined by High-District Attorney turned Two-Face, and is nicely setup for The Riddler, and maybe I’m being paranoid but Morgan Freeman did mention “cats”. LOL.

Overall, the acting was good… I mean, nothing against Christian Bale, he does a kick-ass Batman. Also, nothing against Aaron Eckhart and his Two-Face, but this was The Joker’s film. Okay, I’m sounding a little too much like a fangirl. Heath Ledger was good, I admit~~ But still, AM not sold for an Oscar win. Buzz for it is good, but we’ll just have to wait and see if anything comes up. Right now, he’s sounding like the main contender.

The only part I didn’t enjoy, the only bit that took me away from the film was the last scene where the two little kids (Gordon’s kids) were in danger, and next thing I know the little bugger is all chirpy asking if Batman was okay. It BUGGED me, it was like – WTF, man! You’ve just been involved in a traumatic experience! – Other than that… okay.

The Dark Knight seats comfortably in the top of the best comic-book-based films, it’s definetely not the average summer flick, as it is a lot meatier than many films in general. 4.5/5 =D