Well, at the moment seeing the Red Carpet, but let’s see how well I do tonight~~ Live blogging, and winners as they are announced on this post. Check after the break…

Seriously, I don’t know why I watch Red Carpet anymore… I used to watch for Joan and Melissa Rivers, lol’ But oh well… award season is not award season without red carpets, I guess… xD

The cast of Slumdog is on! xD LOL and some Bollywood dancing~~~ xD 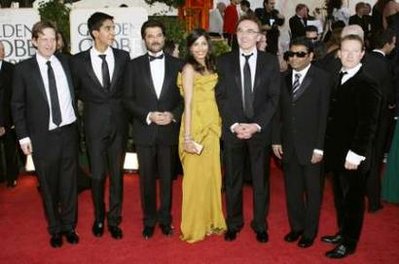 Cast and crew of Slumdog Millionaire

Olivia Wilde looks hot… lol’ Red Carpet rolls eye comment… – can’t find any photos online… yet. LOL Hmm… well, I’m tired of waiting and searching for photos. I’m gonna do a half-ass job here, and not post any pictures. I don’t usually do that, but thought that it will be easier this year. Oh well…

Evan Rachel Wood just made an appearance talking about The Wrestler. 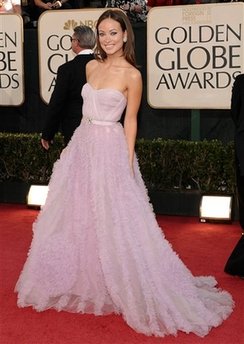 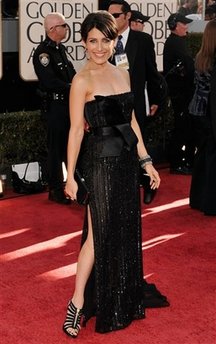 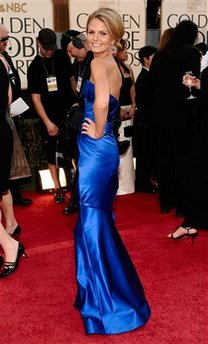 Susan Sarandon is on the TV now, but I’m not entirely sure if she’s nominated… pretty sure she’s not, maybe for a miniseries or a show? UGH, I just saw Miley on the screen… threw up a little in my mouth.

Awwww, Amy Adams… on Oscar de la “RENTA” LOL. xD Is this her first GG? I thought she was nominated for Junebug or something?

Anna Paquin! She’s a bit giggly, or is it me? And now Christina Applegate! ^^

Actually, I’m bored now xD – will only blog if someone that I really really like shows up. 10min. to show~

(LOL’ habit of not-winning – and thank you for making me look so… old. Look! I won!) xD Phunny.

LOL, Ricky Gervais is hilarious. People should consider him as host already… xD

– Best Foreign Film
Waltz with Bashir (whoa, see I knew it… this shoulda at least gotten a nod in animation)

– Best Film Comedy/Musical
Vicky Cristina Barcelona – WOOOOO lol’ For a moment there, I thought I might get it wrong.

So here we wrap this. My predictions SUCKED BUM ASS. 8/14?? just a little over 50% how crappy is that. >,< A LOT of happy surprises like DOUBLE KATE WIN! Especially that one… that was one big WOOSH. The rest was okay… haha, and the guy from Slumdog said F*ck on the air~~ LOL Phunny.

Once again… Benjamin Button was the big big loser of the night. Lost all of it, and it was the most nominated film if I recall correactly. Anyway, I need to make my predictions sharper for this one. Telling you, I was rubbish.