If You Seek Amy, BritneyTV~~

Oh, we LOVE it when YouTube has region restrictions, no? 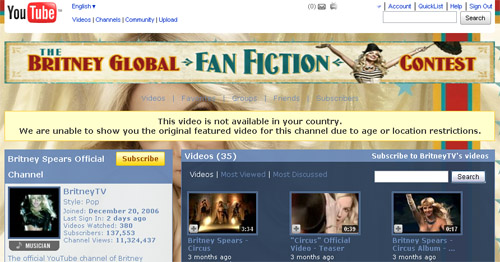 You’d think Britney Spears fans around the world, and not only located in the US would try to watch her videos on YouTube. I would get the ‘age restriction’ – but come on! who hasn’t lied into those signup forms before, right? – But hey! Not only I can’t watch Britney videos from BritneyTV… I also found a lot of other music videos (eg. Cobrastyle by Robyn) that I couldn’t watch because of this. As if!

Anyway, I had just found out Britney released her new video (third, I think) – If You Seek Amy… which I thought was the best track on Circus… not because my name is featured, but because it’s actually kind of smart and sassy. The video SUCKS though… she hasn’t made a good video since she stopped having general shots of choreography. You can’t deny the close shots and quick edits while ‘dancing’ is to hide the fact that she’s not moving much.

3 responses to If You Seek Amy, BritneyTV~~