I actually celebrated my b-day last night with a proper meal, and apparently my last YesAsia order. Belated Happy Bday to me!!! And happy 5 year blogging~~~ xD

My first EVER Japanese DVD – all because it listed ‘English subtitles’. I just couldn’t help myself.

Gu~ Gu~ Datte Neko de Aru, which was translated to GuGu the Cat, was not the movie I was expecting – in a good way. I think I had only seen a short clip of the film, perhaps the 30 second tv spot, where they open the box, GuGu shows up and they all go “kawaiiiiiiiiiiii”. So I thought the film was a comedy, but just like some other WOWOW projects I’ve seen, they border on the dramedy field (like Camouflage, 1 Million Yen Girl, and Don’t Laugh at my Romance).

– See, WOWOW people~~~ if you’d release those mentioned above with subs, I’d probably buy them. –

In GuGu, Asako Kojima (Kyoko Koizumi) is a manga artist who hasn’t had much time for life, other than taking care of her pet cat Ça Va and seldomly writing and drawing for her manga series alongside her team of assistants, including Naomi (Juri Ueno), a fervent fan since her teen years.

There’s a lot of fun moments… sometimes dealing with romantic relationships, and overall human relations… as well as some cat relationships xD – so if you like cats, you can probably enjoy this one. 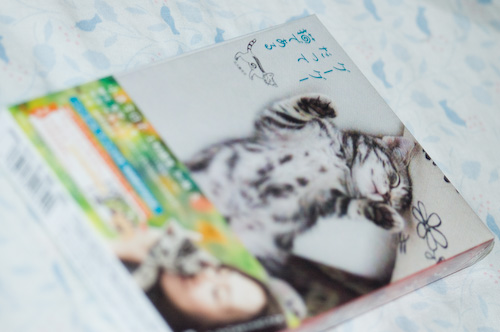 The DVD is pretty good, nice packaging, printed book with info and photos, two-disc edition. It contains more than 2hrs of extras, which include press conferences, interviews, and a tour aroudn the places used in the film. There’s also a feature on the music, including the work they did on the theme song, Good Good.

There’s also a lot of cat footage, which is really cute – and I’m not even that into animals overall~~