Woah~ I was just checking my Google Calendar, and holy! I saw “First Blog Anniversary” on February 13th – at first, I didn’t remember what I was talking about, but then I clicked on it and said “First blog published, 2004 on Flash”. And finally got it! Remember it!!! LOL’ And actually, I’m so good at keeping track of my stuff now, that I have a screencapture of what I was FIVE years ago. 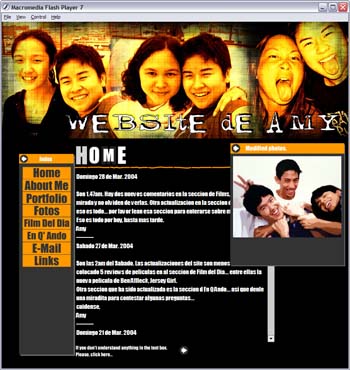 I’m even a little ashamed. LOL – I made a quite-tacky-Flash-based ‘blog’ because I was taking Flash in Vancouver (I got a pretty good grade, btw). I remember the first post ever was to say that I had posted a review for 50 First Dates, and The Corporation. Of course I kept reviewing films, and it became tedious to handle all that data in Flash at the time without XML. Then I made one with XML, but still… I ended up with a HTML version just a few months later.

And just for the sake of it, this is my first online portfolio – made also 5 years ago (but finished and uploaded in June).