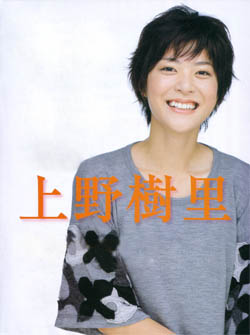 Awww, Juri-chan! I was reading a post over at the boards, and found that Yuuki provided a link to an English-translated  Juri Ueno interview for the latest issue of Nikkei Entertainment Magazine. Juri can be so charismatic~~ LOL’ but apparently it only works on girls. Let’s face it, girls~~~ Boys or most of boys have RUBBISH taste in women… case and point all those guy magazines, such as FHM. Here’s the chart~

It’s a really insightful interview in which she discusses her latest film (GuGu), her acting in Nodame, Last Friends~ Here are some quotes;

“Rather than films, I grew up watching variety shows most of the time (laughs). Refining or adorning myself, I still don’t have much interest in that area. But in this era, the scope of what being ‘an actress’ is have widened greatly haven’t they? In the olden days, being an actress means you have to be beautiful and ladylike else it won’t be possible. Now, there are even roles like Nodame, and because of that, even someone like me is able to be one (laughs).

Being married probably won’t effect my focus towards work but at the moment the image of being alone is stronger. […]