The Incredible Hulk is Here!

Just returned from watching The Incredible Hulk! Short review is that I enjoyed it a lot… maybe not as much as I did when watching Iron Man, even though I’m a fan of neither of them. LOL First things first, I did like Ang Lee’s version of The Hulk, and I thought Eric Bana was quite endearing on his Green Bana version. But I guess THAT’s not the point of Hulk, is it? 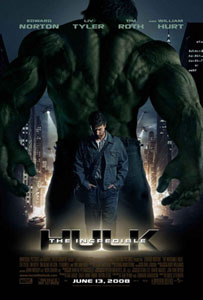 So scrap what you know about the first one, because this one has nothing to do with it. During the opening sequence you are fed a lot of information of how the Hulk came to be, and how Dr. Betty Ross got hurt during which Bruce Banner left… and he’s in Brazil now! “NOTE” If a white Caucasian male works at a factory for minimum wage in country where most of it is considered a ‘third world country’, it’s because he’s probably been persecuted by the military US Army. LOL DON’T PISS HIM OFF.

Okay, so this version of Hulk is action pack… it reminded me quite a bit to Iron Man… especially the end battle sequence with the Original Hulk, and the crazy 2.0 Hulk, LOL. Anyway… action aside – story was quite good, as well as the acting. I’m a little disappointed that Green Norton doesn’t look like Norton at all, but instead looks like a V2.0 of Green Bana. But Norton was good… good drama, good running… good funny moments when he suddenly shows up in Guatemala. LOL’

Then… when he finally arrives in the States to look for Betty (Liv Tyler), she’s with guy… but my heart doesn’t go “tokidoki” in here, but scenes later when she finally gets a glimpse of him. “Tokidoki”… slow motion, LOL and Liv Tyler begins to well up because she can’t believe it. I’m sure that scene would make great transitions to FANFICTION!!!! LOL’ And Liv! From all non-superpower female co-stars, I think she’s been the more fun to watch on screen. I mean, I liked Gwyneth’s Pepper Potts, but Liv’s Betty Ross had some things to do… on her first Hulk encounter, and… well, the funniest moment of the film, I think~ The NY Yellow Cab. That scene was PRICELESS. Or maybe that’s me because I’ve seen a lot of bad driving, but Liv made both my dad and me burst out laughing.

All in all… Hulk 2 will always be compared to The Hulk, and it will always be on Iron Man’s shadow as the 2nd Marvel Studios flick, but it makes for good entertainment. 4/5