I was having a discussion about 2012 (the year, not the film) yesterday, and I kept telling them that I have been expecting the end of the world ever since 1999. It’s been 10 years already. Moreover, my mom always tells me she’s been hearing this “end of the world” stuff — as she calls it — since she was a kid. LOL So that’s just too many years. xD

I just got back from the theater, after the studio stuffed me with free popcorn and soda. Are they trying to distract me? I remember watching The Day After Tomorrow (also directed by End of the World fan Emmerich) at the theater with my friends, and feeling super cold after the show. After 2012, however, I just felt okay. Maybe I wanted a bathroom, since the movie is kinda long and the free soda didn’t help. 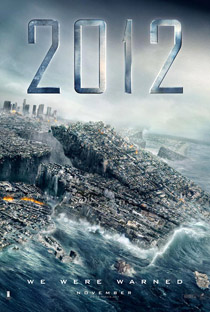 2012 is special effects… some are kinda cool, and sometimes it just makes your eyes roll. Story is your typical disaster film with families apart and saying goodbye… sometimes you liked the characters, and sometimes you just didn’t. You wonder when they’re gonna get it over with — just leave the goddamn dog already! — You can’t leave the theater thinking “Wow, I just saw the coolest film I’ve ever seen.”

One thing I did notice on my way home, however, is that there weren’t many mothers. I mean, Amanda Peet was a mom (I feel old! Amanda Peet is a mom on film!), but that was it. She was there for Cusack’s character, she cared for her kids… stuff happens and her character just reacted. There were loads of fathers, however. There was Danny Glover playing the president of the United States doing Bruce Willis on Armageddon, there was Chiwetel Ejiofor’s dad… and the friend who had a son in Japan (George Segal). There was also the Russian billionaire (he was pretty funny) with his kids, and the Indian scientist (Jimi Mistry). I mean, I love my dad… but my mom is pretty rocking too, okay?

Shout out to Dominic Zamprogna — I still recognize your face on screen, dude! And another shout out to Osric Chau, whom I’ll be blogging later on. As well as Lisa Lu (the grandma) who’s appeared on Lust Caution, as well as The Joy Luck Club and The Last Emperor.

Also, WOW fictitious China! How disaster films are shifting. I bet they are hoping 2012 enters the Chinese market with it. Smart business. LOL