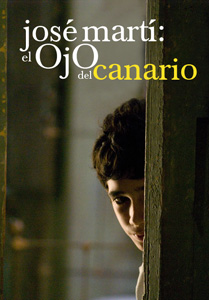 Jose Marti: El Ojo del Canario tells the story of Jose Julian Marti Perez, the Cuban national hero and Latin American literature figure, between the dates when he was 9 years and 16 years old.

The film is more a representation of different things that could have had an effect in the way Jose Marti saw his motherland Cuba. Born from his Spanish father from Valencia and his mother from the Canary Islands, Jose Marti grew up a pretty privilege life getting to study at private school, learning mathematics, and reading.

He is bright and studious, and his mother and teacher want him to continue his studies, despite his father’s desire for him to start working right away. At a tender age, he goes off to work with him, and earns him praises for his King-styled handwriting. In school, he is very influenced by his best friend Fermin Valdez Dominguez, as well as his teacher Rafael Maria de Mendive. All of this, plus his exposure to slavery, which was still practiced in Spanish-ruled Cuba, made him want to yearn for a free Cuba.

The two leads who play Marti in the film — one as a child, and the other as 16-year-old Marti — are more than capable to carry the film. In fact, Damian Antonio Rodriguez who played kid-Marti reminded me of a young combination between James Franco (Milk) and Ben Whishaw (Perfume: The Story of a Murdered). Despite me not believing that Daniel Romero, playing 16-year-old Marti, looks anything like Rodriguez, there’s no denying the talent put into his characterization.

The film doesn’t feel all that connected, sometimes jumping scene from scene without any flow, however that doesn’t take away much from the acting and the story director Perez wanted to tell. Cuba is showcasing a very well put together biographic piece.