To Watch Until They’re 35 – Eva Green

Okay, since I have no idea when my computer will be back up, I decided to try to remember all the names that were on my non-back-up list of actors, in order to not delay my choices and ran into more names that are no longer 30. I am pretty sure that I have got all my names down, I just don’t know if I placed them in the correct order… but it will have to do.

So in the #7 position of our list of actresses to watch is none other than Eva Green. 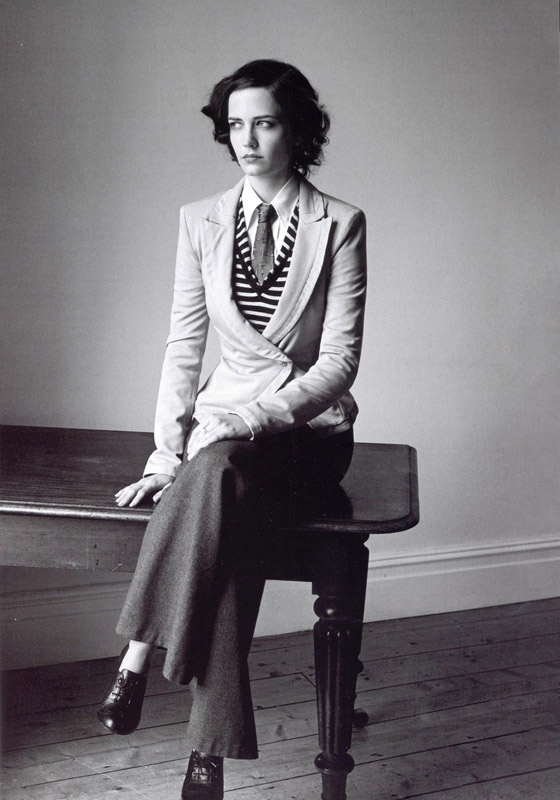 Born in Paris, France on July 5th 1980, this 29-year-old actress shot to stardom by starring on Bernardo Bertolucci’s NC-17 film The Dreamers alongside Michael Pitt and Louis Garrel. However, she’s probably most recognized for playing Bond Girl Vesper Lynd in Casino Royale with Daniel Craig… or playing witch Serafina Pekkala on the fantasy film The Golden Compass, based from Northern Lights from the His Dark Materials trilogy by Philip Pullman.

Green’s Silver Screen career isn’t even over 10 years, but with a start as Bertolucci, we can only expect the best from her, considering she’s stated she has no plans to go to Hollywood to get typecast as a femme fatale, instead she will be searching for the perfect script. Sure that shuts the door from getting exposure, but after working on films like Casino Royale, Kingdom of Hearts by Ridley Scott, and The Golden Compass — that’s like half her filmography — we think she doesn’t need it any more.

A self-confessed nerd — whom we have a weakness for — Green admires Tim Burton, Lars Von Trier, David Lynch, David Fincher, Cate Blanchett, Juliette Binoche and Helena Bonham Carter, so name-dropping doesn’t hurt her a bit. Top that off with a small commercial shooting alongside Wong Kar-Wai, which smells like good opportunity.

She speaks French and English, and is working on perfecting her American accent… and wait for it, she’s also apparently learning Japanese, which you know… would open doors there, since Japan loves anything French. And have I mentioned how exciting the Japanese film industry is? She seems to like intense directors, so could I see an Eva Green collaboration with Tetsuya Nakashima? Please, make that happen.

Sorry, I digress —  What’s next up for her? How about The Last Word directed by David Mackenzie, who also directed Young Adam and Hallam Foe (aka. Mister Foe) alongside Ewan McGregor.