That Was It for This Is It

I’m an MJ fan, I really am. I bought my copy of HIStory when I was around 10 — the first ever album I received as a birthday gift from my parents — and I’ve been fascinated as a kid since I saw him vanished as golden sand on the Remember the Time music video.

I was a bit hesitant to watch this because I knew tickets had been on pre-sale for a month, and I’m not the type to compete for tickets. After all, they did advertise “for two weeks only.” I checked schedule online only to find the 11pm shows listed ONLY, so I was pissed. I thought that they were not showing this for two weeks only, but also showing it on midnight shows ONLY, so I went to the theater to watch District 9 instead… to find out there were other times for This Is It — so I watched both. 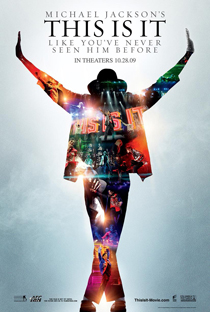 My first advice for American fans (or around the world) who can’t get tickets to their local shows, come over here! My theater had barely 15 people in, and it was the 7pm show.

The “film,” which isn’t really a film… nor a documentary, as much as it is a documented concert, would work better as a straight-to-Blu-ray-or-DVD release than it does on the silver screen. Yes, it’s nice to see it big, but it’s not really a necessary feature. It’s good to get to see Michael there, and what would’ve been — because that would’ve made a hell of a COOL concert. Moreover, it’s great to see this as a person interested in concert-organizing. However, for the rest of people who aren’t attracted to the morbid fad to see The King of Pop before his death for TWO WEEKS ONLY, you’re good skipping it or just waiting for a rental. I’m being honest here, my mom wouldn’t have enjoyed it.

This Is It is a huge Making Of.

For me the most interesting parts (technically) were the in-between videos shot on green-screen, and the conceptual work on the wardrobe and acrobatics. Major props for the dancers… and more props to the few female dancers who I saw dancing in high heels during some sequences (EFF IT! Thriller on high heels!). Major props to Judith Hill, and Orianthi Panagaris, and the whole team involved on the tour. But then again, I do enjoy watching Making Ofs on my own free time.

As for Michael~ He still had it, man. I mean, the footage was a rehearsal, but you can still see he enjoyed the stage. My theory was because he commanded on that stage. Things got done his way~~~ instrumentation, dance routines, lights, fans (ventilation), he had control over all of it. I was sort of overcome by this feeling that he liked that control, but in real life he didn’t have it. That life of a child star, they tell you where to go, what to do and when to do it… the life of the superstar. The chaos in his life didn’t reflect the control on his stage. But that’s my own musings, nothing is ever said on This Is It… this is why I can’t consider this as a film or a documentary.

The music had me thinking of past concert DVDs — like the BAD Tour on Japan and the HIStory Live — It was almost just like that, better technology… a better transfer, but unfinished. I was very close to singing a little bit too loud for my public persona’s taste, but the whole thing left me with even more wishes to be able to have seen Michael perform live once in my life.

However, I do not appreciate the marketing. I do not appreciate those “for two weeks only” signs, only to be later told that for popular demand, there will be more showings. Let us NOT review this for the sake of reviewing a film of someone who passed away, and let us review this with objectivity. I’m not gonna rave about it for being a fan, and I’m not gonna push people to watch it if they don’t already feel like.