The Global Culture of Eating Disorders 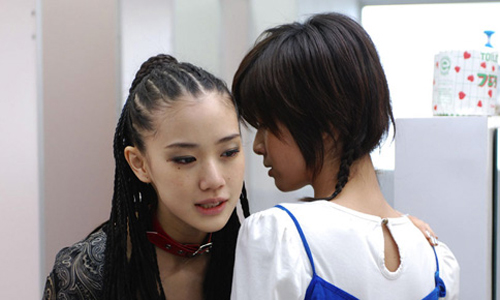 Watching Welcome to the Quiet Room, and listening to Yu Aoi’s Miki character telling Asuka she doesn’t eat because whatever she eats means that someone else more worthy doesn’t get to eat it, totally left me cold. I wondered what was the situation of eating disorders in Asia, since it’s ‘common knowledge’ that Asians are genetically skinny.

*sighs* I ended up reading quite a few articles dealing with the issue as far back as 1999 until this year. Throughout all of them, there is  an emphasis on cases on bi-racial young women, or women living in a bi-cultural environment. Taking the example of Chinese-American or British-Chinese women who weren’t as self-conscious about their weight living on this side of the world, but would get ‘picked on’ back in Asia because they tend to be ‘bigger’.

But I wasn’t too interested in those particular cases, I was trying to find how common are these eating disorder cases in other cultures, particularly Asia. I always thought Asians were thin naturally… always thought they’re skinny and love food. That’s what I’ve always seen in my family. It’s also noted on many of the articles that this value for food comes from the terrible years of starvation they went through in countries like China, India, Cambodia… even Peru where there still exists malnourishment. It is a crime to not eat, when there’s people who have nothing to eat. Yes, that’s why Quiet Room totally freaked me out… it was the first time I had heard that reason~~~ So there are eating disorders much more complicated than the “I want to be thin” one, for bi-cultural people is the “I want to be white”, for others it’s the sense of taking control over their lives…

The problem with being a naturally skinny Asian girl who wants to be thinner and thinner is that it’s wayyyyyy to skinny to the point where you seem their profile standing and it’s all flat. They move their arms and the shoulder-blade pops out, they wave their hands and there are gaps between their fingers with all their boney knuckles, they stand with their legs close together and there’s a huge gap between them. Is that really attractive?

In another article, they say that body image perception depends on culture, and they give the example of a group of Chinese women saying they wanted to be ‘more petite’ in contrast to the group of Australian women saying they wanted to be ‘thinner’. On the other hand, African-American women stated that they preferred a more voluptuous and robust body shape… pointing out that Black women with high self-esteem and more positive body image possessed more masculine traits.

So… does that mean butch women are less prone to suffer from an eating disorder? After all, 90% of these cases are women-related, but no~~~ I found another article where a butch lesbian who wanted to make her breasts, her stomach and hips disappear, she wanted to build up exercising, but had no muscular mass to build.

Is it the obsession of the world to be ‘beautifully white’? Eating disorders were common mostly on white middle to upper class women, now it’s affecting the whole world, due to the media. We’re exposed to everything, from good programming to completely utter crap. Some girl on the other side of the world wants to be just like Lindsay Lohan or Paris Hilton, both skinny as hell… both air-heads pretending to be normal-sized girls eating burgers when you can see the bones sticking out from their fake-tanned skins.

And then people~~~ WE believe everything on television, films or magazines are true when they’re not. You keep telling yourself you know it’s not real, but still there’s that sick voice inside your head that tells you ‘it could be’. So instead of having celebrities lying about their botox, their air-brushing, and obsessing whether common folks believe them to be skinny or not, and fighting to defend their supposed-skinny-ngness – they should try like Jenny McCarthy saying that there’s a whole lot of air-brushing to erase and tuck-in, or Aisha Tyler saying we could also look like that if we had a squad of geeks (hey!) fussing over us with retouching software. 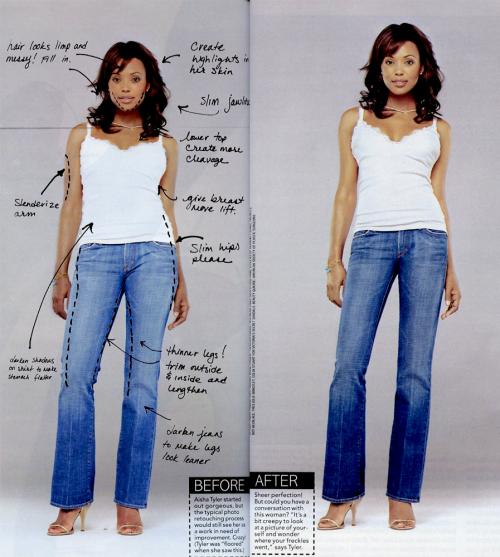 Brazilian supermodel, Gisele Bundchen totally misses the point on why Fashion is being held responsible. It’s not because we think all models are anorexic, it’s because being a model is the dream for many (like many others dream of being actors) despite not being “genetically blessed,” like she says. Due to this fact of not having the ‘right genes’ which is out of their control, they decide to just lose weight which they can control. They are also being blamed because they present their fashion collections on the runway with stick-thin models, which okay…  because “being skinny just goes with the territory in cat-walking.” However, that doesn’t mean women who like to dress up fashionably should not be able to find clothing their size, as they point out on one of the articles dealing with disorders in Asia – 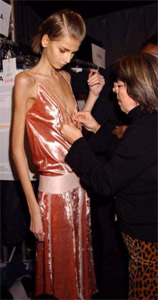 Dieting is not only trendy, it’s a necessity for many South Korean women who want to fit into the most fashionable clothes _ some of which are only made in one small size which is the equivalent of an American size 4, said Park Sung Hye, 27, a fashion editor at Ceci, a popular monthly style magazine for 18- to 25-year-old women.

“They make just one size so only skinny girls will wear it and it will look good,” Park said. “They think, ‘We don’t want fatty girls wearing our clothes because it will look bad and our image will go down.”‘

As a result, “If you’re a little bit fatty girl, you cannot buy clothes,” she said.

Is that not the fault of Fashion? Shouldn’t fashion adapt to us, instead of us trying to reach their unbelievable standard of thinness.

I remember I was watching a program on DW (the German channel) where they were showing how a German scout traveling to Scandinavia looking for models. He stated that he couldn’t get anyone new because Finnish women and Swedish women had lost their good genes due to fast foods, and now they were too fat. This is the reason why many scouts were heading to Eastern Europe (Estonia, and Estonian supermodel Carmen Kass also makes an appearance… who, by the way, I think photographs beautifully) because fast food wasn’t a thing of everyday life, plus they made so little money that they were often slender. That shocked me, I thought he was a total asshole and wished he had been born in China when there was nothing to eat.

In the end, who’s to blame? It’s all a combination of the media (film, tv, fashion) trying to wash our brains telling us what is and what is not acceptably pretty or fashionably slender, as we try to reach their standard of what they say is pretty. It is our fault for caring what they say, instead of sticking our middle fingers up and saying – you know what, fuck you. I’m not buying your products anymore. – Tell them you’d rather not wear that pair of skinny jeans, than have stinky anorexic-breathe, and be vulnerable to all sorts of disease because my immune system is much more important to me than that cute little designer vest I saw at the store.

My money is better spent on yummy food, than a cute designer dress, thankyouverymuch. If designers don’t want to dress you up because you’re too “fat,” then stump your feet and tell them – so what?! I’ll just get the photos of your design, head over to my local tailor and get one on my size. My “fat money” is no use for you.

6 responses to The Global Culture of Eating Disorders