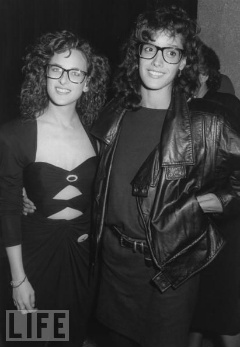 I cannot utterly believe WHY I’m posting this, but… while rummaging through my dusty albums, I discovered the first album I ever EVER bought, back when I was 10? This is WHY we love the early to mid-90’s because the 90’s were tacky… if the 80’s were tacky in American and the rest of the world, we certainly caught up in the 90’s, people.

For past reasons of why they ruled, check the following links:

Forget about leg-warmers, puffy hair and big glasses… though Beals and Matlin certainly blossomed. *tsk tsk* – My 90’s were tacky… flamboyant primary-colored suited boy bands waving and wooshing their flamboyant fans while singing Locomia, LOL’ Or velveted rancheras singing Querida… originally performed by my Latin version of Elton John, with Juan Gabriel. LOL’ But back to the album I found people… if I don’t blog to you about it, you’d have the faintest idea that I was once a salsa listener. Yes, people… I happened to have found Salserin’s album Entre Tu y Yo, which resulted from the Vene-novela of the same name, starring the then boys from Salserin, and the girls from El Club de los Tigritos. *coughTACKYALERTcough*

I certainly never EVER got the chance to grow up with El Club de los Tigritos, but I had the chance to watch the show once or twice, when Cable Magico had a channel from Ecuador. BUT, I did grow up with Salserin… until I discovered the internet, discovered everything… and well, the rest is writing itself.

I suppose Salserin was the first group I ever listened to as I remember watching their telenovela in Red Global (also known as Canal 13) – I even remember the showing of the first episode because they had a special on Maite (that was like the Venezuelan version of Oprah, Laura Bozzo, Cristina “Sera Cierto Eso” or something along those lines)… I also happen to have found old tapings of half the season until the end. I am sure I have the taping of that Maite Salserin and Los Tigritos special. Trust. So as I sit here writing this post on something 90% of people would probably deny to have ever EVER listened to, I listen to the once-again-found album, remembering lyrics and catch phrases like “Salserin con mucho swing.” – Or “Alba, tu siempre seras mi rosa en la playa.” Or Antonella Acosta’s line as “La Carmen”… “Quita esa cara de gallo, mira que camaron que se duerme se lo lleva la corriente. Asi que dale chola, dale CHOLA!” HA!

Okay, I’m talking about the telenovela… looking back, tackiness at its best! Bright fluorescent clothing, some Techno music to fill in the gaps of the Salsa soundtrack. Lip-sync of ill-fitting voices to actors… trust. But back in the 90’s, we didn’t care… or I didn’t care. I watched, and now I watch with a smirk on the face grinning like a stupid idiot because I still find it amusing.

Strong in the picture of my mind is Antonella Acosta’s introduction… and her friendship with girl-next-door Fabiana Rivas, played by Yorgelys Delgado, or is it Yorgelis? Internet seems to be confused about how to spell her name, so I’ll stick to the first one. She was oh-so-in-love with Rene, who happened to be her brother’s enemy. Very a-la-Romeo & Juliet. One scene with Acosta and Delgado, La Carmen doing wrongly-spelled graffiti in the streets of Venezuela, when Fabiana goes and corrects her~~ La Carmen not-so-impressed responds “Esta bien, Chakespeare.” You’ll always remember how to write Shakespeare after that.

So besides La Carmen, and Fabiana… there was Alba, and Valentina… how else would I know the meaning of the word “Cifrina” – there was also Andrea, Daisy, Claudia, Silvia, Anita…. many other girls, and the guys (mostly from Salserin) – Renny, Rene, Jose Felix, and their nemesis Eduardo (Fabiana’s bro), Alex, Maikel *snorts*, Javier… and actually, many other guys too. LOL’

Anyway, I’ll leave you with a little bit more tacky… I’m sorry to have picked on Yorgelys Delgado, I really do enjoy seeing her and remembering, otherwise I would NOT be blogging about her, the work or posting videos. Word. If I thought ill of her, well… I don’t know what happens to people, entertainers or anyone I don’t like. At least I am NOT calling her names. Anyway, I rest my case… here’s the tacky I promised.

Besides, I’m probably one of the only ones blogging about Salserin, El Club de los Tigritos and Yorgelys Delgado… and in English nonetheless. PLUS, isn’t this like High School Musical, almost? In ten or fifteen years, people will look back on HSM and think it’s tacky. Always happens~ xD