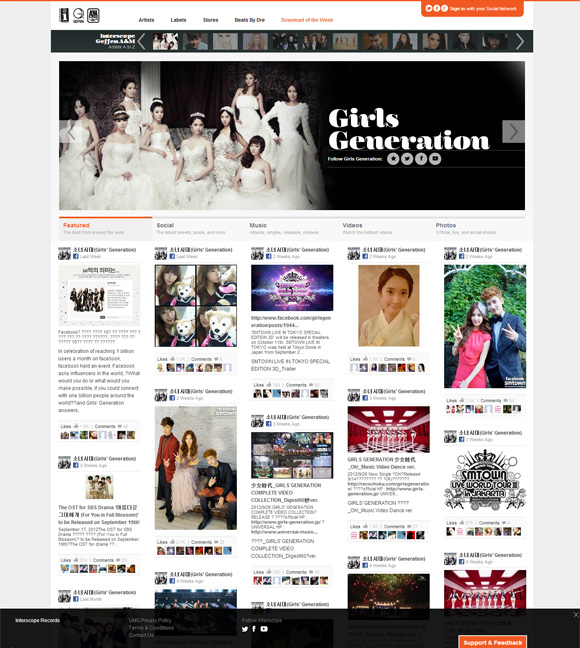 As far as Korea and social media go, I really think they’re busting their butts and squeezing marketing to its max point. It’s not only that they make you wait to the second for a new music video [1][2], spend weeks teasing you with photos and short clips, they follow the idols 24/7 showing them at their utmost disheveled or at their silliest — Koreans know the power of selcas [1]…

But even I have never visited the S.M. Entertainment website. I actually once visit the YG website, but I couldn’t find what I was looking for. In fact, I have never visited a website for any of their idols, because – I think – these are primarily target at a Korean fan-base making their website structure impossible to translate with Google and very non-Internet-Explorer unfriendly like most of Korean websites.

So while I think SM (and YG or JYP on their part) is doing great on Facebook, YouTube and Twitter, I think it’s sad what Interscope’s push has done for Girls’ Generation — NOTHING. They don’t tweet about them, they don’t post FB links on them~ they’re merely distributors and just put albums on the shelves just because SM doesn’t have the necessary American contacts to get those albums on those shelves on their own. The automated aggregator on the SNSD section of the Interscope website is just purely taken from the Girls’ Generation Facebook profile or Twitter page.

In any case, I feel quite lost in terms of websites — I feel like 99% of the times they are created as vessels that hold nothing. It used to be that people would visit a website to interact with people about a similar interest, and that with social media we expect to interact with the stars directly bypassing that sense of fandom of yesteryear. Online forums are dead, swap by Facebook fan pages that go unregulated because there is a sense that trolls are allowed because it attracts traffics and clicks.

Whenever you ask a client why they want to build a website, they tell you “because everyone else has one.” The similar happens to social media, asking clients why they want a Facebook page or Twitter account — it’s never to interact with your followers. Once I asked one of my clients, who had suggested building a website and setting up a Facebook page, to get someone to share once a week or month some cooking tip or recipe. Do you think they have the time? They don’t, and you really can’t hire someone to share for them because it’s not the same.