Who here is using Google+? 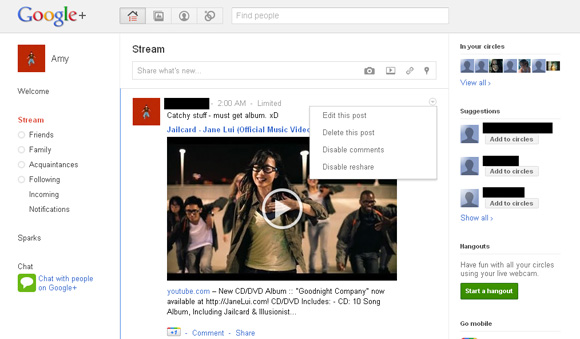 My minimalist side appreciates that it’s all white. I actually don’t need to focus on anything else but the content.

I love that the preview image of YouTube is so big (it seems to post 4:3 thumbnails for Vimeo), and if the thumbnail doesn’t load — you can hit “retry” and it tries to load it again.

If you make a typo, you can hit “edit” like in the screencap. You can also choose which functions to have – to disable re-sharing or comments. You also don’t need to “tag” people, you just decide with which Circles you want to share the info.

Let’s say you have a secret life, in which they don’t know you’re married.

You create the Circle: Alternate Life, in which you posts none of the married-related sharing of your life.

My favorite feature would have to be being able to edit something, and disabling comments or re-sharing.

I’m a little concerned about sharing my browsing habits. LOL

Like hitting +1 on an item I’m looking for that I don’t exactly want to share with people. I mean, it’s enough that Google saves my web search habits, it makes me look like a crazy freak when I see how much I search for “a term” xD It suddenly dawns on you how much clicks you give to something.

Are you using Google +?

One response to Initial Thoughts on Google+