Woah, long time~ Has it been two months already? Well, I thought since One Million Yen has come out (finally!) with English subtitles on an “official” release, that I’d give this a push. I know most of you would have seen Tokyo!, Hyakuman-en and Honokaa Boy by now, but we’re trying to space them out because there hasn’t been any new project announcement since Otouto, which opens this coming January.

In the meantime, you’ll have to enjoy these things.

Something about the film:
Tokyo! Is the short film anthology by Michel Gondry, Leos Carax and Bong Joon-ho, in which they tell three different stories related to the city. 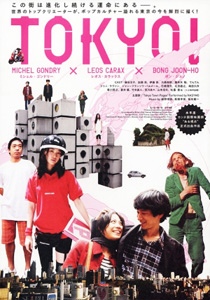 When I first heard about Tokyo!, I couldn’t help but spazz thinking about a Michel Gondry project relating to Yu Aoi. Then the spazz went away, because Yu never got the chance to meet Gondry, LOL. But I was still excited over this, if only for the international exposure of it all.

The three short films don’t really work together as a cohesive film, and you just sort of feel that these segments are too long for their own good. It feels this way because many went into this thinking it would be just like the “X City, I Love You” anthology films, in which we saw 14 segments of five minutes each.

Separately, though, they seem like more interesting pieces. While I didn’t particularly find Merde good, it was my friend’s favorite, so I guess it all depends on what you like. I found Gondry’s Interior Design quite good, if only to see Fujitani and Kase (and Ito) on screen. I also thought the concept of Fujitani’s character turning into a useful piece of furniture was intriguing, but at the same time scary – and kinda funny. Did anyone else thought “pirate with the wooden leg” on that scene?

I can’t really comment too much on Merde, since I feel it went totally over my head and I don’t get it. Also, my friend keeps pointing it out. I’ll say it again, it’s weird.

I’m still battling it out between Interior Design and Shaking Tokyo as my favorite segment, though. I didn’t know anything about Hikikomori before this, and I must say I feel kinda like one from time to time, so you could say that I actually connected with that. There isn’t really much dialog on this segment, and I can’t really recall if Yu ever spoke, but there were a few good scenes.

I thought the scene in which Yu faints, and Teruyuki Kagawa presses her tattooed buttons was genius, but the whole earthquake scenes that make people go in and out of the Hikikomori state is just too much of an anvil for me.

I decided to do two separate ratings. One for the whole film, and one for Shaking Tokyo alone.

Favorite Scene: Hmm… tough one to choose because the one with the buttons is more like a reaction, I guess. How about that scene where she does that separating the thumb trick people do.

Here’s some posters, and check out the captures~