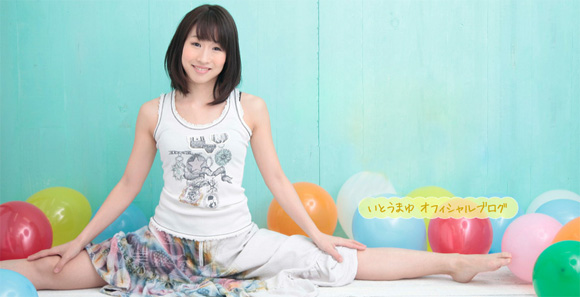 What I did fine was a clip of her doing some – sorta – interpretative dance.

I also found her blog.

I love the internet. Remember when it was soooo difficult to find stuff?

Anyway, I didn’t know that she was this young. She’s only 6 years older than me… and I thought she was, uffff, way ahead of that. It’s crazy. I also find it crazy that she’s a pretty good dancer and so fit… I”m not used to this type of skill in people that I see on children shows. Usual Peruvian kid shows have models… who most of the times don’t even like kids. LOL I also love that one of Itou Mayu’s listed “skills” is a simple “eats well” or I guess… “healthy eating.”

I also ran into this clip, which apparently was done for the 50th anniversary of the show. (おかあさんといっしょ 50周年夏特集). If I did my calculations right, the clip must’ve been done in 2009. To me, it’s crazy the show has been running for 50 years. LOL