Things that Blow Up on Film 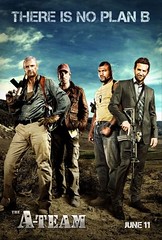 Because I recently watched both The A-Team and From Paris with Love, I felt I saw a lot of things blowing up. Despite my liking of District 9 and Inglourious Basterds, I don’t really consider them just films for showing things exploding – so in theory, the last film with things that blow up I liked was the first Transformers film, which I saw with Julz. LOL

The best thing for me on The A-Team was Sharlto Copley — of course, he was on D9 — and I thought the film was a lot more comedic than an action flick. And as for Paris, I don’t know if I’m being too sensitive, but it just reminded me of that KKK video game I saw on the news some time ago. Travolta, with a shaved head, and Rhys go on a shoot-em up rampage against Chinese, Pakistani… where there Arabs? and some black people. The women were either prostitutes… terrorists, or you know – that US delegate was a total b!tch. LOL

Check the list here, if you have other film additions… leave a message.