I had seen a couple of commercials promoting Modern Family, which I thought were kind of funny, so I decided to look the series up and give it a try. It was a surprise to learn that each episode only lasts about 20min. (as a 30min. show, just to show you how much commercials American shows have), but those will be the funniest 20 minutes of your day. 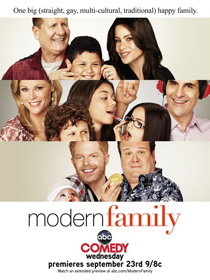 Modern Family just tells the story of that… a modern-day family, starting with Jay (Ed O’Neil) and his second wife Gloria (Colombian actress Sofia Vergara), and her kid… old-soul Manny.

Then there’s Jay’s eldest daughter Claire (Julie Bowen), her loser husband but “cool dad” Phil (Ty Burrell), their 3 kids… not so bright Haley… not so bright Luke… and the one picking on them for not being bright, Alex.

By the first episode, it had me literally laughing at the top of my lungs, which hasn’t happened for a long time. I had so much fun watching it over the weekend, that I’ve already caught up with the 13 first episodes, and I’m waiting for the remaining episodes.

Stonestreet, playing Mitchell’s boyfriend, is hilarious, even though he seems to be kind of normal compared to the rest of the nearly neurotic characters. He also brings balance to Mitchell’s snobbish butt by teaching him to shop at Costco, and is the pissed off gay clown saving Mitchell’s butt at the gas station. He’s my favorite character.

So this is one of the new shows you should be watching… you know, instead of like… Ghost Whisperer or some other bad show.