Just got back from watching Get Smart, the television-show-based film starring Steve Carell, and Anne Hathaway… alongside The Rock (Dwayne Johnson) and Alan Arkin. I did not expect watching this, so when I was invited, I took my dad who is a fan of the show. He liked it, but he’s not die-hard fan – we thought it was pretty funny. I actually heard him laughing throughout. 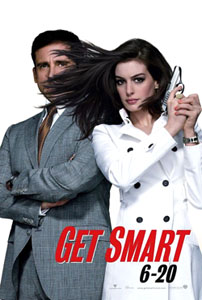 Funny moments here and there, mostly physical comedy and one or two play on words that are snort-inducing. Pretty predictable in the first 10min of the film… or however long it was until Anne Hathaway showed up on screen. Nothing shocking, just a simple comedy that gets you showing your white pearls, without gasping at the action sequences.

And Hathaway don’t need to worry about the Pink Eye, she looked fine on film… hoping that I’m guessing the right scene, of course. She did pretty much 75% of the ass-kicking in the film, but Max is the hero~ Hey, just a guess!

Is the film worth it? I mean, yeah sure… you can go watch it at the cinema and spend whatever-amount of USD$$ for it, but it’ll make a perfectly fine watchable movie on cable. Just saying…

NOTE: Popular Fans Alert!!! – Guess who makes an appearance?? In the scene of the fancy party, Max makes some moves while Agent99 tries to match him up step by step. In the dance scene, Max takes, none other than, Lindsay Hollister who played Big Bertha Muffin on Season2’s Don’t Tug on Superman’s Cape. Where is Mary Cherry when you want her to popup?