Or at least, that’s what I understood scanning through the articles in Japanese (with Google Translate, LOL).

Tokyo Kazoku (Tokyo Family) was supposed to start shooting in early April last year, but due to the earthquake, it was postpone — postpone long enough, until now. Apparently (if I read right), Tokyo Kazoku began shooting on May 31st. There was a press conference that day, and the cast was there~ including Satoshi Tsumabuki and Yu-chan. 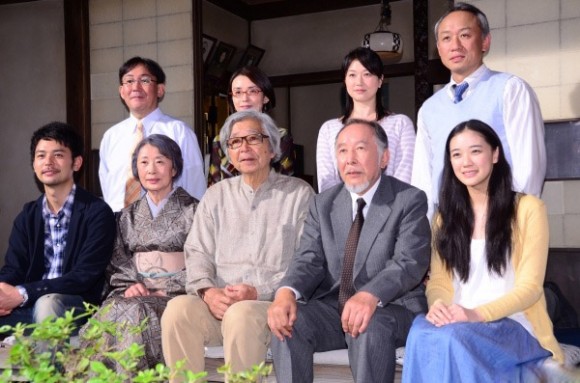 As you may (or not) know, Tokyo Kazoku will be a re-telling of the 1953 classic Tokyo Story (東京物語) by Yazujiro Ozu. Apparently, Yu-chan will be taking on the role played by Setsuko Hara. But… I really can’t tell you more, because I’m ashamed to admit I haven’t watched Tokyo Story, even though every cinephile has.

But if Setsuko Hara-san’s character was the same as Satoshi Tsumabuki’s girlfriend [1], then you probably already knew that. If it wasn’t… then it’s all news to us. xD

In the meantime… Yu looks grown-up. I feel like I haven’t seen her in so long, even though she was in that episode of Shokuzai in January. Of course, Tokyo Kazuko will be released on January 2013.

Here’s a video of the event.