LAMB Acting School 101: Natalie Portman – Where the Heart is

Now, compare that to Leon… or Black Swan. Mmmkay~

As a teenage Portman fan, I obviously watched those AND enjoyed them~~~ but we’re here to talk about Where the Heart Is now, so let’s talk about it. 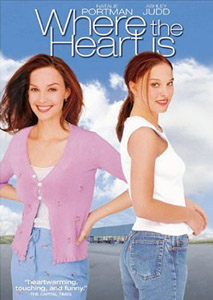 Where the Heart Is, for what it’s worth, marks Portman’s step into womanhood, as she played a 17-year-old pregnant Novalee Nation, giving birth in a Walmart. In short, she’s pretty tacky but with a lot of heart… and what’s even more ironic, the first time I saw Portman in that fake pregnant suit in slippers (and then barefoot), I thought of Britney Spears whom later ended up stepping on a public bathroom barefoot.

But I digress. Where the Heart Is is sappy, and over-the-top acting drama… it ends up being funny. Portman looks so awkward as Novalee… skinny and so overly-fake-pregnant, plus the hair. Add to that Novalee’s white trash mother who abandoned her family for a man whose name she can’t even remember played by Sally Field, hot-peen-hungry mother of multiple children named after junk food Nurse Lexie played by Ashley Judd, cut-throat music producer Ruth Meyers played by Joan Cusack, and AA-member fornicating Sister Husband played by Stockard Channing — all over-acting. Pure amazingness.

Let’s not even begin to discuss the love-making scene, which marks a first for Natalie Portman on screen, which she shared with UK actor James Frain who’s like 15 years older than her and plays a character named Forney. Novalee doesn’t have sex with Forney, she makes love to him after his sister passes away. There’s sweet love-making pop-country crossover music as his hand entwines with hers.

But despite it all, I couldn’t take my eyes off the film… except maybe the bits without Natalie Portman on screen, in which we focus on Novalee’s baby daddy Willy Jack Pickens played by Dylan Bruno. His storyline seems a bit pointless, since we’re not supposed to feel sympathy for him and it just makes the story go slower. But then again, without him… we wouldn’t have the amazingness of Joan Cusack.

Natalie Portman as a “reformed” Novalee, mother of Americus and photographer, holding her camera shooting the fat baseball team, or with her Xmas/winter gear, and looking for Forney are probably the most gorgeous Portman could be on film.

Where the Heart Is might be cheesy, and actually pretty bad — and shame on you if you think it’s the best movie ever made — but it’s one of those films teenage girls have to watch. We were all probably 14 when we saw it, and I guess 14-year-olds watch much more crass films nowadays. However, I still think 12 or 13-year-old girls would be able to appreciate it.

I don’t think Anywhere but Here is worse than Where the Heart Is, but IMDb seems to disagree.

2 responses to LAMB Acting School 101: Natalie Portman – Where the Heart is