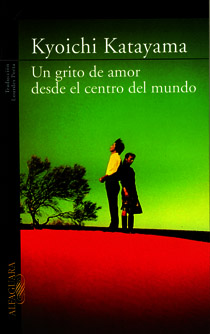 So this month I bought a whole (and I mean like half a dozen) books because I felt like I had been spending all my money on music and movies, and had stopped reading. To be honest, I was beginning to feel like I was being a little ignorant on everything that had to do with books xD

So I grabbed everything Asian I could find on the shelf, including this Alfaguara Spanish translation of Crying Out Love, In the Center of the World (aka Socrates in Love, aka SEKACHU in short Katakana xD) by Kyoichi Katayama. The book sprang a manga series, as well as a film (starring Masami Nagasawa, Mirai Moriyama and Kou Shibasaki), and a TV drama… as well as other Asian remakes, namely Korean. xD

The book is about the tragic young love of Sakutaro and Aki, and it was apparently very well-received by the public in Japan because of its theme. The Spanish translation is a bit idiotic, some of the words used are very Mexican in use, so I didn’t really know what it meant. The story is super short, but it expands a long period of time so the story feels rushed and characters are barely examined.

For example, I’m not really sure why should I care much for Aki, other than Sakutaro having a crush (or being in love with her), I am led to believe she is good nature, a good student, shy, and a regular kawaii girl, but I’ve no idea what makes her tick, what are her passions. I don’t relate to her… or him. I know he cares for her, I also know he contemplated getting under her panties or wanted to touch her. I know they are supposed to have developed a deep friendship, but it’s not on the book. I know people begin to see them as one, and I’m a sucker for this type of relationships, but it’s not on the book.

If I want to see sweet tragic love, I’ll get Sweet November (though, I haven’t read the book), but the movie starring Charlize Theron and Keanu Reeves (though badly received by critics) made me so sad.