I have been with the urge to ride a bike for a while now, I just don’t because Lima sucks. It’s stressful, will someone run you over? Will someone try to mug you? The black smoke coming out of the cars and public transport. The noise…

Drivers are irresponsible, and people on the street suck too. It’s just the way it is.

But one can dream. xD

I recently saw an article on a National Geographic magazine, with this photo~ 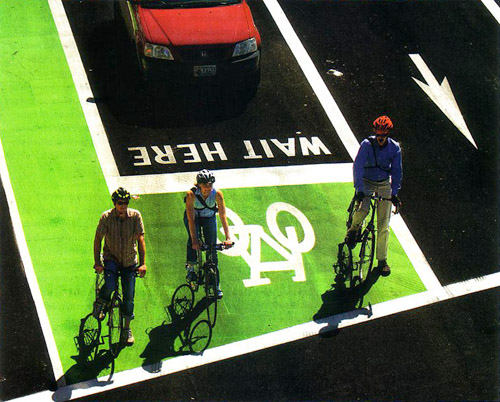 Saying Portland, Oregon is the best city in America to ride bikes. It has over 250Km. of biking paths. And there’s also the Bike Commuter Act passed about a year ago that lets companies give $20USD extra to their people for bike expenses. Add to that, people actually stop their cars for them…

I’ve had a dream that had to do with it. xD
I want to open a design studio (I’ve seen a place, super cool LOL) and I had imagined in my mind that we would give our clients x% off if they come to our offices riding a bike. I would go every day with my bike in my sweet office loft.

But I need better environment design. I need signals, and I need someone that will assure me that I will be save while on my bike. Can’t have that with over 400 road accidents in the year. Not until we start being civilized.