1.30hrs to the broadcast, but you can head… over  the Film Independent’s Spirit Award website, to see the LIVE blue carpet. 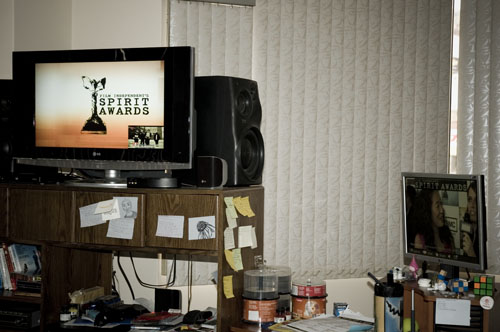 My TV, the Picture in Picture (PIP), and my computer set to Indie Spirits this afternoon~~~

Well, I hope you’ve been watching- only 10 minutes to go… Melissa Leo was the cutest on the interview. The most fun there, actually… Ellen Page was there! Penelope Cruz… Richard Jenkins! James Franco, Mickey Rourke~~~ They also talked about Milk, and all about how they thought of rushing the opening of the film against Prop 8.

This is actually quite an interesting live event, a LOT of talk about films and projects… and minimum glamour and dress talk. I mean, how many times should we hear “who are you wearing?” – Refreshing~~~ other than the missed interviews, even though Film Independent SHOULD get primary spot on the carpet, so no one can skip them~~~ and other weird camera movements…

Kudos to them for the LIVE Event online~~ and hooray for NO RESTRICTIONS!!

I think you can head back to their site just after the broadcast to watch the ceremony, and stuff.

Acura Someone to Watch Award
sorry broadcast missed this one~

John Cassavetes Award
In Search of a Midnight Kiss

This is it, folks! 10/13, not bad… would’ve wanted Richard Jenkins for Best Actor though~~~ And Tom McCarthy for Best Director, YAY!