The Chronicles of Narnia: Prince Caspian

Just got back from watching a screening of the newest Narnia flick, and let me tell you, I enjoyed watching The Lion, The Witch, and the Wardrobe, but this one is far more better than that. Sure, purist might be a little ticked off by switching lines from characters to characters, but I’m telling you that I enjoyed Caspian a whole lot more.

I had been planning to stay away from promotional tools, interviews, etc. etc – 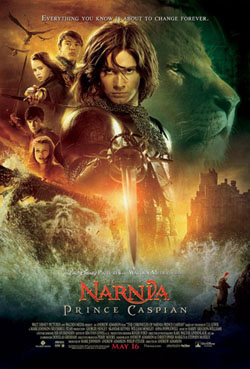 I didn’t get my glimpse to the trailer, until I saw it on Apple Trailers, and had probably seen it a couple of times before watching the film. I also haven’t re-read the book since the first time I read it a year ago, even though Caspian is one of my faves of the series (that includes The Magician’s Nephew, and The Last Battle) – I feel that the adaptation did justice to the book and feel there weren’t any moments missing that I could remember.

I’m probably a perv, but everyone seemed to be very or overly good looking, ha! Ben Barnes (Prince Caspian) was very hot, and sounded a bit with a Spanish accent… and William Moseley (Peter) and Skandar Keynes (Edmund) held their own. Hahaha, okay… off with the perviness~

Caspian shows a whole load of action and battle on this one, and it’s definitely a lot darker. There was even a scary moment, when someone is about to awaken the White Witch… but I don’t think Tilda Swinton was actually there, though it sure feels like it. LOL’ – But she’s not credited on IMDb, but the film shows her name… so I’m confused on that.

It begins with what once was Narnia, and Miraz’ newborn baby… when the chase of Prince Caspian begins. Then we see the Pevensie kids, who are not so kids anymore~~ Georgie Henley (Lucy) is HUGE! She’s grown so much, and Anna Popplewell (Susan) is all grown up, when we see the introduction of a possible romantic storyline in the film for her. Some dude approaches her, but obviously Susan’s not interested. LOL’ Lucy comes rushing, and they end up seeing Peter who’s gotten himself into a fight, and is ‘saved’ by Edmund. *BAM* it’s time to go, and they reminisce on Narnia…

In the meantime, Prince Caspian is been chased by his uncle’s army, and ends up blowing the horn of Narnia… that way calling the ancient Kings and Queens of Narnia – so the Pevensie kids find themselves back where they wanted to be.

The film continues with battles, and dialog that reveal how much characters have change. It’s the whole moral thing that Narnia has, but it doesn’t take from the film. Aslan makes a comeback, and you see he’s different from the previous film, which makes sense because “things don’t happen twice the same way”. He’s not there to be an all-loving kitty kat, Aslan is there make everything right. He’s serene, yet severe.

Lucy is the hopeful, while Peter is trying to prove himself to be the High King of Narnia to adults, which is a difficult thing when you’re a young man. Edmund is always there to back Peter up, and Susan… Susan is rocking on this one! Chicks with a bow and arrows always look hot. Popplewell almost made me forget how ‘grownup” Susan became by the end of the series… plus she gets a bit of innocent action with Caspian, LOL.

Reepicheep makes his triumphant appearance as the noble battle Narnian mouse, and he was great. As well as Peter Dinklage who plays Trumpkin the dwarf, I love his acting! I’ve seen him on about 3 films more, and I always find him great on his roles~~

For music lovers, you’ll find Regina Spektor singing the Ending Credits song, The Call, which had me scratching my head because I knew that I could recognize that voice.

3 responses to The Chronicles of Narnia: Prince Caspian