Ah, it’s been a busy weekend, but finally found the time to watch Hard Eight. Here goes to the Potluck! Why do I think about Chinese Hot Pot when I say Potluck? Makes me hungry~~~ 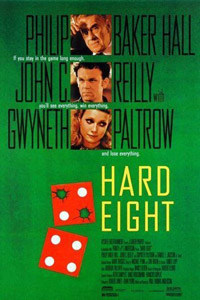 First, I must admit that aside from There Will Be Blood and Punch-Drunk Love, I’m not familiar with Paul Thomas Anderson’s work. I mean, Magnolia and Boogie Nights do belong to my “to watch” list — the properly watch, not caught on TV when it was already on one — but it’s not like that list is getting any shorter.

Hard Eight beings with a very young John C. Reilly playing… Well, John being a bum outside one of those American diners, when Philip Baker Hall playing Sydney — which apparently was the original P.T. Anderson title… even though Hard Eight seems like a better title — picking him up, and offering a cigarette. Sydney asks John what’s up with him, and he says he’s broken even from the  casino trying to get some money to bury his mom. Sydney asks him what he would do if he gave him $50. Simple John just tells him he’d buy a meal, but Sydney seems to have other plans… he’s going to teach him how to survive with just $50 and head over to Las Vegas for some trick gambling.

However, this is not a film about how John learns the craft, and lives happily ever after. First there’s a two-year jump, and we see John well-dressed, as Sydney plays Keno — isn’t that Bingo? Why the name-change? — They are living the life, but what were Sydney’s motivations for picking John up? It certainly wasn’t for cheap tricks, or taking advantage of him… as John responds “I will f*ck you up if you f*ck with me, ok? I know three kinds of Karate: Jujitsu, Aikido, and regular Karate.”

Thought Hard Eight is a bit “okay, I did not see that one coming” as much as it could be predictable, it’s pretty much worth it. I mean, not only because almost 15 years after — feeling old again — Gwyneth is being addressed as Gwyneth (and won an Oscar), and Philip Seymour Hoffman is an Oscar winner, and John C. Reilly is an Oscar nominee while P.T. Anderson is like a what – five-time Oscar nominee?

Hard Eight is the movie for Sydney, you want to know about him, why he does what he does, and in the end – you know, it’s worth it. The acting is convincing, but it just made me realize John C. Reilly pretty much plays that same role over and over again. And… must all actresses play a version of a hooker before they turn to serious acting? It’s Gwyneth… with, it must be some kind of neurosis! She just loved to get in trouble. That incident with the motel and the handcuffs… you must admit it came out of nowhere. LOL