So tell me, is this impressive for a couple of months watching Indian films or what? I must admit, though, that I’m still not familiar enough with Hindi or any other dialect spoken in films. My level of understanding goes from having a ladki or ladka giving their dil tere liye. And I’m not even sure that’s Hindi or Urdu.

Also, though most of the films I’ve come across are subtitled, some weren’t properly sync to their video sources. I think that happened to me with Ghulam, Nayak, Yuva, Chalte Chalte and maybe Hum Tum. I can’t even remember any longer. After this, I realized I really really REALLY love Rani Mukerji on screen… say it with her voice “she’s so cute.” And her eyes are so expressive with such on screen charisma. Her dancing doesn’t seem to be at the level of ease as… let’s say- Madhuri Dixit, but she compensate with the acting.

Though her performance on Hey Ram is barely 10% of the film, I do think it deserves its spot on the  Top6 of her films and everyone should watch it. It’s an amazing movie.

END_OF_DOCUMENT_TOKEN_TO_BE_REPLACED

3D printers keep popping up in news. This time around with Yahoo! Japan developing a fancy module that includes a 3D printer that fuses the visual experience of searching for information with the tactile results of 3D printing for children who have sight impediments.

I think this is how it’s going to go~ 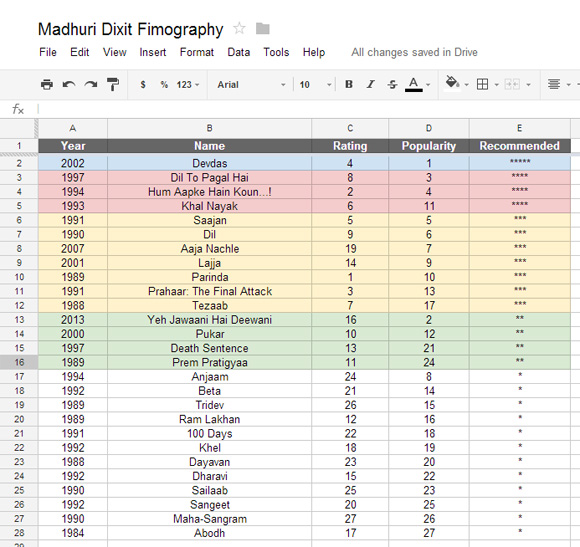 … after I’m done with Rani, of course. xD

There are A LOT of Indian movies, and each star has A LOT of films in their filmographies. This time around, I’ve taken the “most voted” films in IMDb alongside the “best rated” and added a star with personal recommendations I’ve been given to create this list. I don’t even know if I will find all these with subtitles. If I managed to watch 15 or 20 of these, I might even have a Madhuri Dixit Films Ranked list [1][2] XD

I remember the first time I got to watch Swallowtail Butterfly and found it interesting that Ayumi Ito spoke a couple of lines in Mandarin. Later I was surprised she was in the cast of The Go Master; it just seemed like Ayumi Ito had maybe some interest in working outside Japan. Interestingly, she’s also the one Japanese actress working in Kpop music videos [1], and I know for certain she speaks pretty good English.

Then again, Japan doesn’t seem to like its actresses trying to work in other markets [eg. Rinko Kikuchi, Koyuki xD]. I wonder if she hasn’t considered working in the US or Europe, or maybe they don’t consider her Japanese enough or hot enough. After all, US and European casting seems to be so random at times.

Anyway, while googling a photo of Ito for the previous post, I ended up running into this short film she did back in 2005 directed by someone called Nomura Yasuo (野村泰夫) titled Shanghai Lian Xiang (上海恋香) or translated to Shanghai Love Fragrance… or possibly referring to the smell of incense. The short that lasts 50ish minutes sees a Japanese young woman (I don’t think they mention her name) that arrives to Shanghai to deliver her grandmother’s ashes to the bay because she had spent the 1930s in the Japanese concession of the city. In there she met a young Chinese man and fell in love… and it’s all melancholy and sadness due to the events of the time.

There’s no much info except for this page.

Ito plays both characters of the woman and the young version of her grandmother, with dialog in different levels of Mandarin and Japanese. It gets a little confusing when you have to read Japanese for big chunks of Mandarin, and Chinese characters for most chunks of Japanese dialog xD But I think you get the point across.

You gotta get your Ayumi Ito fix any way you can.

There’s also a song that plays throughout~

I was a little disappointed with a mention of an unmentionable during the Soompi interview with the girls — I think IT was mentioned by Narsha. But they totally made up with this interview with Ask in a Box.

Also makes me love JeA even more. LOL And she won the Kill Bill battle! But really, what got me laughing like an idiot was the response to describing BEG as a flavor, to which Narsha quickly responds “Oriental medicine” xD ‘coz it’s boiled for too long. LOL