See, this would be a mega-talent post if NHK would only let me embed Shiina Ringo’s performance at the latest Kouhaku, but no~~~ they gotta make things difficult.

Anyway, I think I may have died a little and gone to heaven. One of my wishes from last year may be coming true or something. Faye Wong singing new material — for New Year nonetheless — it’s like the creative muses got together and made Shiina Ringo and Faye Wong perform so close to one another, some babies may have been born with no talent at all because the concentration of it might be too much. LOL

as per usual with Faye Wong stuff, I have no idea what this song may be call except for Yuan (愿) which can mean “desire, wish, hope, willing, ready” — take your pick. You can listen to the studio version here.

The live version is… off, apparently Faye — diva and all – recognized she messed up a bit. I’m really blaming her time off stage, but it doesn’t matter… I can just LOOT AT HER. THAT STAGE. That stage is stunning beyond words. I can salivate looking at that stage and love that I can see it in high definition… there are just no proper words to describe it.

Thanks to Cfensi for the heads up.

The Song of the Seven Sons – Aomen

I don’t remember when I first watched this clip, but I remember I saw just a bit of it — the first two lines — on CCTV. Maybe it was during the 10th anniversary of the Macao Handover, but I remember the little girl singing.. it was just that, and then they cut away. At that time, I spoke no word of Mandarin (or Cantonese, or any dialect),my mother was watching with me as she listened to it and translated. She turned and told me “you know my name is not Macau, that is not my name.” — A sudden rush of emotions came over me.

I have no idea why that line was so powerful to me, I literally had to go to my room because I felt a little dust bugging me and my tears forming.

There’s another version here, just in case. And the audio on 1ting.com

That was then. I have no idea what got me tonight — must be The Flowers of War business, I always get like this when I read a lot of negative press against China since the Olympics LOL. Anyway, I went on a hunt for that song because I didn’t know what it was called, and my mother didn’t grow up in China singing it so she had no idea it was a popular children’s song.

Called the Song of the Seven Sons – Aomen (七子之歌-澳门)… apparently there’s a Taiwan version as well, but it’s not as hip [1]. I thought there might be 7 versions of the song for different regions that were part of China or something xD

Anyway, a really GOOD translation of the lyrics is hard to find, but I managed to find a good one without doing any translating work (because I’m so lazy like that) but a lot of googling. Chinese, pinyin and translations after the break!

END_OF_DOCUMENT_TOKEN_TO_BE_REPLACED

The Sorcerer and the White Snake’s Promise

I love it when I listen to songs that I find translations easily. xD

END_OF_DOCUMENT_TOKEN_TO_BE_REPLACED

The Moods of Ella Chen and Hebe Tien

You know you spend too much checking out the Cpop music scene when you look at this and think it’s the funniest thing ever because it’s so true. 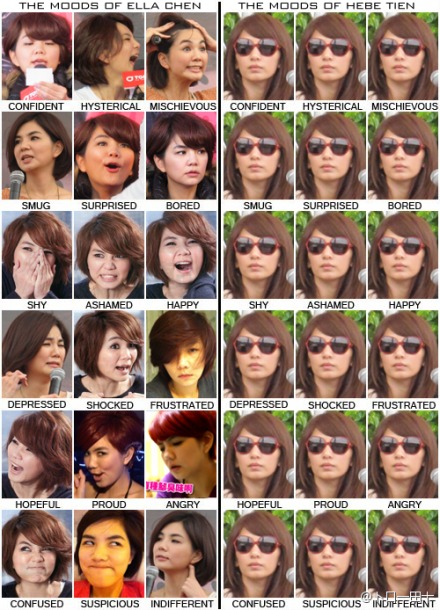 I wasn’t/still not a big fan of S.H.E but I gotta admit I’ve warmed up to them, and I guess that comes from my liking of Hebe’s solo albums, which I gotta admit surprised me a lot more.

I used to — still — find Ella the most entertaining. I’ve never seen her acting, but when I catch S.H.E MVs or clips, she always cracks me up. Her face just crack me up, looking at these pictures cracks me up. That girl is hilarious.

Then there was Hebe~~~ hahahahahaha.

Does this mean that Blind Spot is going to become a single? Because that was one of my favorite songs in the album, which you would know if you had already read my review of Black.Choice.White — which obviously wasn’t my choice of English translation but Gold Typhoon’s.

I think Black.Choice.White seems too simplistic as a translation — I mean… there’s the black with the Hei, and then they choose white even though Ming can’t be really translated to that. My chosen translation was Dark.Select.Clear which I suppose was playing with the Good/Bad concept with the Dark part being the bad, and Clear as a way of dissipation of the dark. It’s not fully bright, you see? xD

But then again, I’ve been called delusional before.