Ao Akua arrived this afternoon! – Book is the cutest thing ever. LOL’ Tinier than I expected really~~ 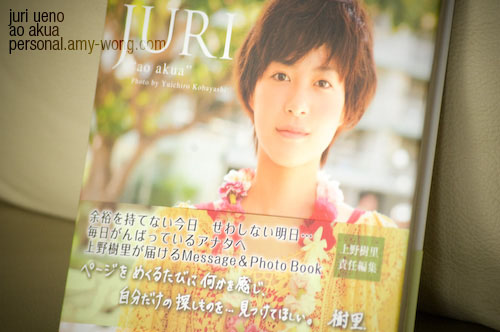 Though, I don’t love this PB as much as I love A Piacere, mainly because I was a tad bit disappointed on the photographs. Don’t get me wrong, there are a few great shots, but a lot of snap shots too~~ What I love about this one? I like the concept, and the fact that there’s a companion DVD.

More after the break.

END_OF_DOCUMENT_TOKEN_TO_BE_REPLACED

Schoolteacher Hisako Oishi struggles to imbue her students with a positive view of the world and their place in it, despite the fact that she knows full well that most of them will die in the war.

Me in Red~ Jumping, and Bumping my Knee

Yes, I hurt my knee doing this, but still~~ was kinda fun. What you think?

I also need to get a remote control for my Nikon D70s, anyone has any good suggestion as to what I should get? It’s hard figuring out when the timer will go off, jump and get a good shot… also, going back and forth from camera to spot to jump – so NOT FUN.

Natalie Portman is an Elephant! And other Sesame Street Presentations

END_OF_DOCUMENT_TOKEN_TO_BE_REPLACED

Thanks to Lainey, and NataliePortman.com~~ Variety is reporting Natalie and Brad are teaming up for a new film!

The film has a long ass name, ready? Are you sure?  It will be the adapted film from the book called, “Important Artifacts and Personal Property From the Collection of Lenore Doolan and Harold Morris, Including Books, Street Fashion and Jewelry.” – Yes, that’s a whole title. We’ll referred to it as “Artifacts” for the moment~~~

Pitt’s Plan B will produce with Portman’s Handsomecharlie Films banner. Portman brought the book to Pitt, whose company is Par-based.

The book takes the form of a Sotheby’s-like estate auction catalog, with 325 entries and photographs depicting items that reveal the private moments and the rise and fall of a four-year relationship between the fictitious couple Hal Morris (a 40ish photographer) and Lenore Doolan (a New York Times food columnist in her late 20s).

The project will be developed as a romantic comedy to star Pitt and Portman.

At this time, Brad Pitt has a LOT, and I do mean a LOT of work~~ He’s got Tarantino’s Inglorious Basterds coming out soon, followed by Terrence Malick’s The Tree of Life, and Moneyball by Soderbergh. While… well… Portman has only Brothers, which we’ve been waiting for a while now – with Jakey!! xD and Maguire.

I am also waiting to see New York, I Love You~ despite some of the other people involved in it. Ha! And she’s algo got Love & Other Impossible Pursuits, but I’m guessing it will be quite a while until the day I get to see that one…