So I have a complaint… I always get crappy detergent commercials — the Sapolio detergent Principe commercial suck, and it sucks even harder that women aren’t offended by them, as if women’s only thought in their heads was just to get a man after they’re done with laundry.

But then a couple of weeks ago, I saw Camucha Negrete’s face on a Twitter Ace promoted tweet. Then my mother came to me saying she’s seen the funniest detergent commercial since Ariel’s Chaca Chaca [clip] in the late 70s, which according to a comment on YouTube [1]:

Was a concept created in Mexico.

So it’s really no surprise at all that Ace, in all its region in Latin America, has employed the help of the Leo Burnett agency [1] to develop the concept of O Mistério Ace (The Ace Mystery) — for Brazil — or El Misterio del Sostén (The Bra Mystery), which stems from the fact that all Latin American countries have strong Telenovela roots. According to my search, the Brazilian version seems to have come by first with an array of different Portuguese Brazilian accent dubs [1] [2] [3] [4] [5], and the concept has now just made their debuts in different Spanish Latino versions from Argentina, Venezuela, Colombia and Peru.

Note: The Chile version seems to be the same to the Argentina according to the uploads on the Ace Chile YouTube Channel.

In the commercial, the “mother-in-law” (played in the Peruvian version by Camucha Negrete, and different actresses in the others) finds a tarnished bra in her son’s room. Thinking it belongs to her son’s girl, she storms into a restaurant telling her son off, as well as suggesting her “daughter-in-law” to use Ace because it keeps whites clear.

Things then get complicated.

I don’t know how “viral” a detergent commercial can get considering the core of Telenovela audiences aren’t usually hooked online. But it’s a good commercial, nonetheless.

So Yu-chan has short hair for reals! She sports her new look in the new commercial for Right On and everyone is tweeting the hashtag #yumeetsrighton (if you’re interested in checking it out). 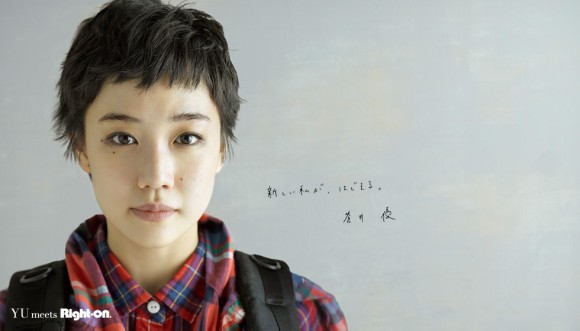 Yu is also all over the 2012 Fall/Winter catalog for the company xD, and she’ll also be sporting this new look in the cover issue of November 2012 of Mina Magazine.

The Right On YouTube channel also has a brief “interview” with Yu, as well as a short Making Of the CM. You can also browse their website~

Helados D’Onofrio’s Classics and the Times~

You know, I’m not currently a big fan of Helados D’Onofrio mainly because since the mid-90s, the company has been regurgitating the same type of ice cream over and over again. There’s only many ways you can mix vanilla and chocolate on a stick, you know?

Their brand has gotten stuck in a way that it only does combinations of chocolate, vanilla, lucuma [1], and a very cringe-worthy hot pink strawberry.

Then again, the same thing happens with snacks and sweets. There’s only so many ways you can mix chocolate cookies with vanilla cream, or vanilla cookies with an assorted arrays of creams (yes, once again: chocolate, lucuma, strawberry… but sometimes mint and if they’re feeling adventurous, peanut.).

But as with many things you grow up, you can’t hep but have a weakness for the memories it brings back. I do remember enjoying my chocolate Buen Humor, the chocolate-cookie-vanilla-ice-cream Sandwich, the fruity Eskimo, and as a little kid it was all about the Copa K-Bana (you know, as in “Copacabana”), and the Vasito (little cup) which was a tiny cup with a one-single flavor “scoop” — Yes, it was either chocolate, vanilla, lucuma or strawberry.

But the one thing that brings the most memories to me are the D’Onofrio men and women who would bike the city blowing their horns to the typical sound of Helados D’Onofrio.

As a developing nation, we have been trying to minimize the sounds of the city (because we’re a very noisy city). Lima is filled with signage asking drivers to not honks their cars, etc. because noises are bothersome. Small business have sprung, with families opening small bodegas where they sell an assortment of things, and you guessed it, ice cream. This is why, D’Onofrio sellers cannot always be found riding their bikes everywhere around town — except for some neighborhoods that remain relatively small — and when you have the luck to run into one (a picturesque sight that brings many memories), they don’t really use their horns any longer.

So ever since I read this post, equaling the sound of a D’Onofrio ice cream seller to “the death cry of an exotic bird,” I’ve been thinking about them. The hard work it must be riding around the city, under the sizzling and humid summer, seeing people passing by and knowing that they now compete with little bodegas who sell ice cream which are properly refrigerated.

I feel a bug of making a documentary about them, but I haven’t work on film for years now. I feel inadequate, but I feel the need to put this out there. Somebody must do something to remember all of this, because… as Osen would put it — it’s in danger of been swept away with the times.

More Yu Aoi narration work, this time for a 30sec. animated commercial for Tokyo Disney Resort… “where dreams come true,” that carries more of a storyline than some of the movies we watch in theaters. LOL

I hope Yu-chan doesn’t only focus on narration work in the future, coz I’d be pure disappoint. But as I’ve noted before, she’s developed her narration voice now. She’s expanding her voice range.

I was watching my YouTube upload feed, and was shown this commercial instead of the Telefonica Movistar one, and thought it was really good. At first, I thought it was just an Olympics commercial, then I went “duh!” it’s a Bounty commercial.

It was directed by Bram Van Riet for Caviar Content.