We Are More by Shane Koyczan

One of the most “proud to be Canadian” moments at the Winter Olympics Opening, even if you’re not Canadian, was the moment Canadian slam poet, Shane Koyczan,  took the stage with his “love song” to Canada “We Are More.” 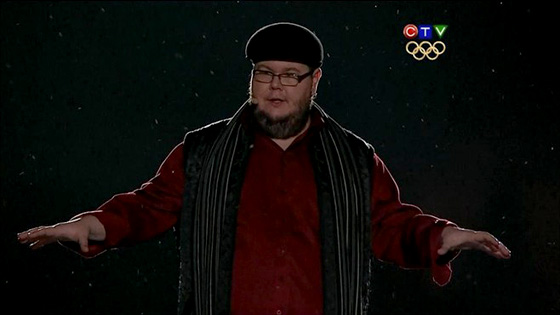 CTV took some time to catch up with Shane after his presentation.

How does that feel?

I’m honestly flabbergasted. I don’t know how to react. All I can really say is thank-you, and those words never seem to suffice because I want to express the totality of my gratitude, but I don’t have much more to offer than thank-you. I guess it’s like I said in the poem: please and thank-you.

END_OF_DOCUMENT_TOKEN_TO_BE_REPLACED

Did you watch the Vancouver Olympics Opening? Sadly, Peru… especifically America Television, even though they’ve got the rights, they’ve only done a 1hr cap of the whole opening. So I ended up watching on ESPN, which wasn’t much better. One, it’s fullscreen instead of wide. Plus, the guys couldn’t shut up on the first part of the show.

I will post cool photos if I find them.

The show was nice. Living in Vancouver, I did get a bit emotional, but not as emotional as I got on Beijing 2008. However, Vancouver did a pretty great show, even though there were some things people point out.

One thing I hated was Nelly Furtado, Bryan Adams and the song. It was cheese, I can take cheese but not at the almost beginning of the show. They should have closed the show instead.

Sarah McLachlan was pretty great vocally, as was KD Lang… but does KD Lang need to sing that song again? She does it perfect, but isn’t there another song? Oh yeah, what’s up with the pop-version of the Canada anthem? It just felt not very patriotic, in my opinion.

What I loved the most? The digital displays, beginning with the ice cracking, the killer whales swimming — skipping the yellow fields and the flying dude — and continuing with the punk rock celtic tappers. Because they were punk rock, right? They had tattoos, mohawks, dark eyeliner, leather, jeans and Converse Chuck Taylor Low-Top… and they had plaid fabrics, and they were playing celtic music. I’m pretty sure they did a bit of Riverdance too… plus the tap dancing. With the red maple leaves digital display. It was my favorite.

Check back later in the day. In the meantime, check out the Vancouver2010 website.

END_OF_DOCUMENT_TOKEN_TO_BE_REPLACED

Together – Adidas’ Beijing Olympics by PSYOP

Overall, the marketing campaigns for everything that had to do with the Olympics was pretty awesome. China outdid itself with everything from architecture, urban design, print campaigns, tv campaigns, etc.

This particular commercial (the series of commercials, and print ads) was very moving to me. I remember the first time I saw it, it kinda made me all fuzzy inside especially when we reach the volleyball sequence, with the music and the people behind them. Very emotional.

commercial series + making of + print ads after the break~

END_OF_DOCUMENT_TOKEN_TO_BE_REPLACED

Sorry I didn’t Live blog the Emmys, but come on. It wasn’t that interesting, was it? Coolest moment? xD Dr. Horrible taking over the broadcast – hint, irony? – Whatever you say about streaming, still… downloading episodes/on demand beats watching things on tv. And as for resolution? There are big enough files that you can watch. Great HD quality. xD

I haven’t been able to read about all the winners, but some highlights!

The Beijing Olympics Opening also won (though I dunno if it won more than one) But it did win for Director for Variety, Music or Comedy Special – BUT! WTF!! Award given to Bucky Gunts? I think not. If the award should be given to someone it should be Zhang Yimou (or the Republic of China) because from what I’ve heard about the NBC Olympic Broadcast… it was… NOT pretty.

The Olympics was a gorgeous event, but the NBC broadcast was a chop-fest.