Sorry, I couldn’t blog the SAG live…
my internet connection died on me at 8pm, and just got it back.

I was kind of Okay-ish with my predictions xD

And Yay for Michael C. Hall! And Yay for Glee!!
A little boo for Toni Collette not winning though…

Bridges, Monique and Waltz become the almost factual winners of the Oscar by now with these wins, which only leaves just a few days before nominations are announced xD

Biggest “I Saw that Coming” Moment was Sandra Bullock possibly winning a Best Actress at the Oscar. I mean, seriously. Really??? I love Sandra Bullock, she’s funny… but get real!

END_OF_DOCUMENT_TOKEN_TO_BE_REPLACED

GGs on at the moment.
I had a couple of spazz moments…

Below the list of winners as they are announced

END_OF_DOCUMENT_TOKEN_TO_BE_REPLACED

Nominations are in! Just with a quick look, I’ve only seen 60% of the nominees, so I’m excited to see the rest. Looking good for some of those peoples there. Not really big surprises, except for a couple double nominations  and one double nomination in a category… and some new names in the Foreign category.

My scandalous and ironic side says Peruvians will hate Chile even more (for unnecessary issues) – dearest The Milk of Sorrow didn’t make it to the list.

END_OF_DOCUMENT_TOKEN_TO_BE_REPLACED

So I wanted to make some time to work on those subtitles I was supposed to work on, and today is October 8th! So it’s perfect to release YAMM006, even if we are a little ahead. 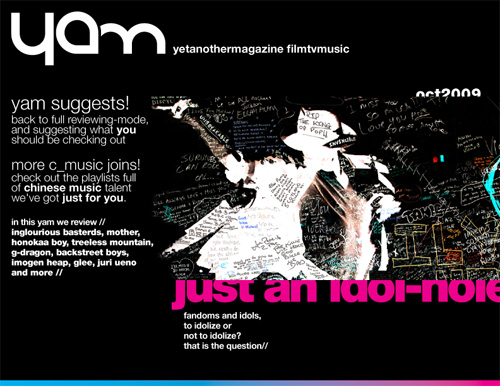 Thanks to Julz for working so hard on the cover story, and all those reviews. ^^

So head over here~~~

Always the ubber long nomination lists… – I’m not much of an Emmy knower, but it’s always good to keep track. Plus, Neil Patrick Harris is hosting x) – I’ll watch it if only for him, maybe he’ll throw in a Dr. Horrible joke. LOL

Apparently, Tina Fey’s got 22 nods!!! – though I haven’t counted yet…
there are really too many categories… xD

Hell Yeahz! for Dexter’s Michael C. Hall (!!), Hugh Laurie for House – I’m sorry but I would love to be an ass such as him, if only I were that talented. LOL – And OMG! Jim Parsons!!!! I don’t watch The Big Bang Theory, but I love Sheldon!!! Ha! – and I see some conflict of interest here… but Neil Patrick Harris for Best Supporting Comedy! xD

Dexter got one extra for Jimmy Smith as guest actor. (t=3)

Weeds got 3 other nods! (for casting, cinematography, and sound mixing) (t=6)

And Stewie must be over the moon with Family Guy getting a Best Comedy – talk about a comeback after being cancelled.