Just to Spite You~~

Four months ago (maybe five) I had a ticket to see BackStreet Boys at GM Place in Vancouver, but Canada didn’t let me in even though my friend was getting married. So I missed her wedding, missed seeing my friends and I missed BSB. Damn you, Canada.

Anyhoo, later I find that BSB is coming here. Crappy end of the deal? “Mundo Pop” is not a BSB show. CRAPPY. Also in the show is Belanova, which is pretty bleh, and Adammo (??) Who the frak. Oh, yeah~ and tickets are pricey. And there are a LOT of sections. You know, normally should be 2 zones… General and VIP, but NO! We take zones to another whole new level~~~ First, we took it to Super VIP. Yeah, there’s a Super Zone, but that’s not it! Take this concert as an example… there’s General, Preferencial, VIP… Super VIP… Kandavu (the company organizing the concert), and then there’s BSB. Normally, I would’ve chucked the price of the ticket~ Like I did Bjork. xD

I was about to buy a BSB zone, but let’s face it… ++$100 for a ticket is not exactly MY thing. said the one who wouldn’t chuck $60 to see Dixie Chicks. LOL’ – I still buy cds, so I still give away my money. There should be a deal, right? Show receipt of a recent (name of the tour) album and get a discount. xD 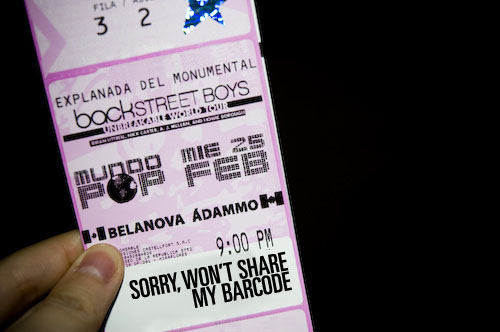 Also, Belanova doesn’t seem to fit with BSB… just saying. But I’ve got an open mind, I will let both groups try to impress me. But yeah… I’m paying this just to spite Canadian Gov. LOL otherwise I wouldn’t have chucked that money xD

Let’s start off with a quote from EW.com:

Bree Van De Kamp has a deeper role: She is Wisteria Lane’s beacon of perfection — the exquisitely starched pleat in a wash-and-wear world — and God love her, it’s the only thing keeping her sane.

We didn’t always love Bree, so correct in her deportment she made Miss Manners look sloppy.

END_OF_DOCUMENT_TOKEN_TO_BE_REPLACED

Marion at the BAFTA

I thought this two videos of Marion accepting and talking about her BAFTA wins were too adorable to be missed.

Marion Talks About Her Win

German Lessons with Geri and Victoria

Too funny a video.

I think Victoria might be mashing her German with some Spanish, and says she’s intelligent x’D

Hahaha… anyway – too much language geekyness. If I keep at it, I might end up adding a German category. *tsk tsk*