I am most certainly rubbish with this. Mainly because television requires a lot of hours of your time, which just doesn’t help if you need to watch everything. While votes on award shows are only required to watch 2 episodes, I try watching all the episodes on a season (of good shows). The bad ones never make it pass the 2nd week. LOL

So this year, I don’t think I watched too many shows. And I don’t watch reality any longer, maybe an episode a month of things like Iron Chef, or Project Runway, or So You Think You Can Dance, and/or Ramsay’s The F Word. I like Ramsay. He reminds me of my uncle. Hahahaha.

END_OF_DOCUMENT_TOKEN_TO_BE_REPLACED

What is I watching?

and I just began watching House last night. This season premiere blew me away. I’ve got a bizarre thing going for House. LOL’ I actually think he’s pretty hot… in the OMG-he’s-such-an-asshole-but-so-smart-and-plays-music kind of way. And there was also Franka Potente in the episode. Potente, *laughs* always makes me laugh. It’s a Peruvian thing (dunno if it’s Latinamerican) – it’s commonly heard “esta power” or “esta fuertota” – sorry, I can’t translate that. But “Potente” always reminds me of that, so whenever I watch a film with Franka Potente, I giggle.

Anyway… I’m rambling. The premiere of Season 6 was wicked. Very different from a House episode, but still good. I did miss seeing Cuddy, though. It’s guaranteed that I’d be watching next episode.

Also… next week, Desperate Housewives begins… which, okay~ last season wasn’t so good. In fact, I’m beginning to screw up my DH collection because I’ve decided to not buy Season 5, but I’m willing to give Season 6 a try. After all, the first time I saw the later seasons of Buffy, I didn’t really liked them. xD

Nothing else. I think it’s time I pick up the pace for film viewing, I do want to be eligible for my own awards.

Also! I can’t wait any longer for Dexter and United States of Tara!!! And I’m also planning to watch Mad Men Season 3. Also interested in Big Love. And I know I should watch True Blood, but all the “OMG this is truly better than Twilight” scares the shit out of me.

I just posted YAM 003 over at my portfolio~~

There’s a lot of international flavor in it… all by chance actually. It really wasn’t planned, it all just came together like that. There’s a couple of rant articles on movies and music, loads of reviews including complete non-fanatical reviews of Ao Akua, Utada Hikaru, DBSK, Hathaways, U2, Madeleine Peyroux, and Michel Gondry/Bong Joon-ho’s Yu Aoi’s Tokyo!

ALSO! A special on the Peruvian film winning the Berlinale’s Golden Bear top prize~~ The Milk of Sorrow, and some of the discussion regarding the original name “La Teta Asustada”. 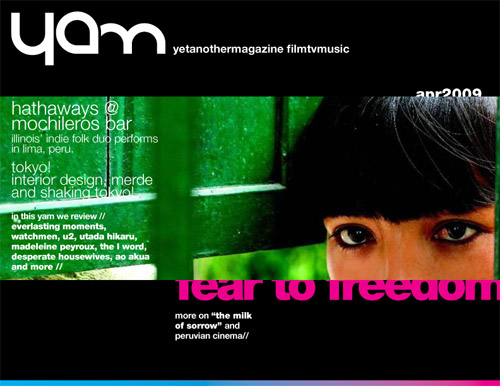 Head over there now!

Short days away from turning 23… O.o

Also, Coraline opens this week in the US, and next week here in Peru (even though it’s dubbed) – AND +++++ This month brings a new issue (2nd issue, in fact~) of YAM – if you haven’t read our first issue, do so here – this same week (same day as the Coraline opening day, in fact) Guu-Guu Datte Neko de Aru is out on DVD R2 wiht English subs~ My first Juri, first Japanese DVD ever. *excited*

END_OF_DOCUMENT_TOKEN_TO_BE_REPLACED

Measuring the Popularity of a Show or Movie

How can we measure the popularity of a TV show or a film?

I just finished watching the latest Desperate Housewives episode… episode 100!! But I’m still DYING to see the newest episode of the last The L Word season~~~ AND, the newest Showtime Toni-Collette-starring-Diablo-Cody-written-30-min-dark-comedy~~ (yes, that’s one word) United States of Tara.

DH aired at 9pm (at the same time that TLW airs), but still no hint of the episode of TLW… why is that? Is it because TLW isn’t as popular as DH? Is it because TLW airs on Showtime? But Dexter also airs on Showtime… though I’m pretty sure Dexter takes a little while to show up~~ The fact is… I have no idea why I’m dying to watch The L Word tonight. Maybe it’s because I have to wake up early tomorrow meaning that I wouldn’t be able to watch the episode until later today. LOL Combine that with my left-over anxiety left from last season’s Molly+Shane… and lack of web comments on tonight’s episode.

I would assume that people that watch Showtime are more web savvy than the people that tend to watch ABC, so I’m sure someone that watches TLW would be able to make IT happen.

Now… if only I could get Showtime in Peru. Cable Magico *hint hint nudge nudge* … *punch punch* get it? And cut that crap of “Latin American version of *insert name of channel*”.

OK… back on my subject~~~ I know the more popular the film is, the faster it hits the internet. Is it the same for shows? Or does it have to do with target audience?