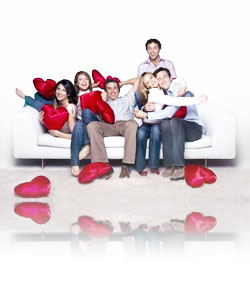 Though it wasn’t overly lasting, Coupling (the UK version, not its abominable US remake… ugh much?) should be included into anyone’s list of  “I should have watched this”. This is the case for me, I don’t get BBC comedies on my cable system (only the news, and they recently began showing BBC Entertainment), so the first time I saw this was on Eurochannel a few years back. In fact, they were already showing the final season… even then, I fell in love with the show.

I think of myself as a bit of a mix between Susan, Sally and Steve. LOL’ But all characters were equally hilarious in their own way… and unlike FRIENDS, I never ended finding a character annoying. Perhaps, it’s because it only lasted 4 seasons, so I never got around to growing to hate them… okay, maybe I hated Oliver – but that’s because he is too much of Joey, and I ended up hating Joey.

Steve (Jack Davenport) is hilarious… and man! His voice!! His voice and the monologues… like the one for “Lesbian Spank Inferno” LOL’ Jeff is also hilarious with his explanations, theories, women-related situations and many words on “breasts”.

And more than Richard, I love Richard and Sally’s interactions, because well… Sally is gold. LOL’ “I finally understand why you called him ‘donkey’.” And totally missing the point. I think that my favorite episodes of the show, revolves around these two~~ with episodes like the one and the Spiderman theme, and the one where Sally ends up singing “Susan the Happy Trotting Elf” – *snorts*

Then there’s Jane who is hilariously just out there… where? You know… there~~~ with the talking snakes, or improvising the traffic report… showing up naked to a dinner, or saying she’s a vegetarian that eats meat… you know, almost like a bisexual. x’D

And Susan! I love uptight Susan, and I love it when she says “apparently”, and her French accent. LOL’ “Giselle, the French bitch” xD and her history with Australian men~~~