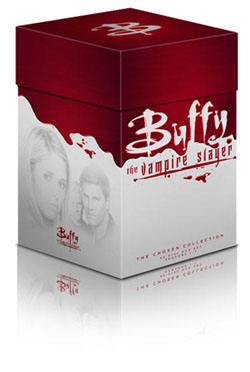 END_OF_DOCUMENT_TOKEN_TO_BE_REPLACED

I was REALLY looking forward to buying the Buffy Tarot Cards Deck! I even created an account with TFAW.com just to find out they didn’t ship to Peru, so my friend was gonna buy it for me.

Sucky! I don’t even read tarot, lol… but the deck was a must-have because it was so awfully pretty!! [see, because me buy awfully pretty stuff, LOL] – Anyway, my friend was ordering for me, so I thought it was a sure thing~~~ until I check up on the link just to find a notice!

THIS PRODUCT HAS BEEN CANCELLED. Official word from Dark Horse:

“Due to circumstances beyond our control, Dark Horse will not be producing the “Buffy the Vampire Slayer” Tarot Deck. We sincerely apologize for the inconvenience, but no existing orders will be filled. We appreciate your support of this program, and again apologize to those who placed advance orders and to fans alike.”

When did that show up? I don’t know. But I demand a proper explanation!! LOL’

Say~~~ what if DH releases the artwork on high quality printable digital files!?? It’ll be good to have, and it will be such a waste of prettyness if it’s just discarded~~~ And I’m sure many will still buy the deck, if they EVER decide to publish a print version. I know I would~~ My printing abilities wouldn’t compare to the quality printing they would offer…. most likely. Non?

The Paley Television Festival paid tribute to Buffy the Vampire Slayer, because Buffy is cool, okay? Anyway, they managed to reunite most of the cast (except for Willow, Faith, Giles and Angel… aka. Alisson Hannigan, Eliza Dushku, Anthony Stewart Head and David Boreanaz).

I was trying to find different photos of the event, but all were basically the same… SMG with Green, low-res group photos, etc. However, it was nice to hear about Emma Caulfield out and about, since we don’t get to hear much from her projects. I have a few links talking about the event:
END_OF_DOCUMENT_TOKEN_TO_BE_REPLACED

Buffy Doing It with Spike Makes It to Numero 1!

And Cherie (Rosanna Arquette) and Shane (Katherine Moennig) made it to the Top 10, ha!