I am mad excited about this concert, and mad jealous about it, because 1. Dude, it’s in Korea. I don’t do that type of tourism. xD 2. Chances of BEG actually stopping by Peru are close to null.

There are a number of reasons I’m excited for this… the main one being: it’s Brown Eyed Girls. Now, they’re all grown up and comfortable with themselves and this whole concert concept centers on the temperature of 37.2C which is the temperature the body reaches during the loveeeeee motion. I’m glad for them, that they get to play around with that.

The next best thing to actually being there for the Seoul concert, other than a concert in Lima of course ;P, would be a Blu-ray release (preferably) but I would settle for a DVD if they must. 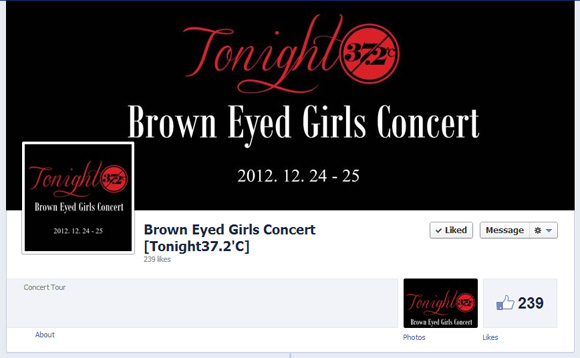 Yes, please. Someone should make this happen in Peru~~~ like, cough~ Noizu Producciones. Cough. I would pay $300 bucks to watch an intimate unplugged with Brown Eyed Girls and to be up close. LOL And you know I’m cheap ass for concerts, but I’ll do it for BEG.

Recently, I’ve noticed that Kpop YouTube channels have been uploading their content with English subtitles!! That makes them official English subtitles — for some major groups like Brown Eyed Girls’ GaIn’s Bloom [MV] and Miss A’s I Don’t Need a Man [MV] (they’ve even added Simplified Chinese!) are recent examples — rendering in my opinion most (if not all) Kpop fansub groups useless.

There’s now no reason to upload an extra video with subtitles… at least in English [1].

Having said that… the quality of subtitles are very important when choosing your fansub group. It is, of course, the content and subtlety of the translation that matters the most, but in terms of hardsubs- it’s also about type-setting. It needs to be readable, and personal comments kept away out of the subtitles [1]. Matters should be as professional as possible… that also means language should be as neutral as possible.

You know I don’t really mind my songs not being translated… but it’s nice to find your favorite songs done the right way.

So thank you, JyariKpop, for your quality subs.

My favorite is, of course, SunnyHill’s Pray [1].

END_OF_DOCUMENT_TOKEN_TO_BE_REPLACED

I’ve said it before, and I’ll say it again — I find it shocking that this is the same girl that needed to research sexyness for Abracadabra. Having said that, I love LOVE LOVE her latest mini album, so much at first listen that I’ve already picked up a physical copy of it to have in my collection.

The track Tinkerbell is sick, and it makes an interesting contrast to this clip of GaIn giving pole-dancing lessons in a really funny way.

Remember the days back back in the day when MTV was about music videos, and they had a show called Making Of the video before premiering a music video? Remember when they used to announce music videos and it was important? I miss those days…

And even though these music video directors talk about the big budgets given to only top artists, it feels like it’s been ages since I’ve liked a western mainstream music video. The Rihannas and Britney Spears don’t impress me — though, I gotta admit, I didn’t mind that Katy Perry music video for Wide Awake.

I don’t mind Lady Gaga, but her last couple of MVs have been lost to me.

There are some other music videos that are not so mainstream that have indeed peaked my interest… but I’m taking my eye candy — all of it — from crack Kpop music videos. Because… you know When Kpop Went Beyond American Pop.

The 2NE1s, Big Bangs, and other idol groups with their glossy and marvelous candy music videos infect my eyes and earworm into my brain. It’s hard for Korea to actually put some emphasis into their creatives and they should, so we must work with them on that. Otherwise… how will people know about directors Hwang Soo Ah and Cha Eun Taek?

Your music videos matter, Korea. Pull yourself together!