I watched District 9 yesterday, and I enjoyed it a lot. Actually, I watched Moon this past weekend as well, which was also pretty great. However, I had noticed that I had previously marked both films as “not interested“. Why? Actually, because I marked most films that way, unless I’m already interested. But this also made me think about the films I’ve watched this past year, and which ones I’ve enjoyed the most.

I’ve never followed Star Trek, but I admit I enjoyed watching the film this year.

And on a similar topic, I finally finished watching Battlestar Gallactica Season 1. LOL

But why do I seem so reluctant to watch Sci-Fi? Yes, it’s the nerd tag… I guess. I think my mother puts it best — She’s not interested in aliens, in other worlds, or UFOs — I think I’ve had the notions that Sci-Fi was just escapism, and it is in some of the films, but some of my friends (some sci-fi and comic book lovers) have taught me and made me understand that Sci-Fi can be so much more. And I do love a good drama.

But in the end, people don’t really listen.

My cousin, yes… that same one that told me Love Happens was money well spent, HATED District 9. Her brief Facebook status read something like “District 9, sucks! Badly…” and it got a bunch of comments including mine asking whether to believe her or not, considering she liked Transformers 2 (So good, she said), to which she replied “aliens!? c’mon>>>> no more comments“. LOL – The fact that she thought the idea of aliens is ridiculous should have hinted that she shouldn’t have picked District 9. Actually, she told me she didn’t wanna watch Inglourious Basterds either, to which I fainted. xD

What is good sci-fi? My friend made me sit in front of my computer screen (we haven’t seen each other since we graduated) and told me I was wrong. He told me Good Sci-Fi is Good Drama, you get social commentary in the form of metaphor and you can place those stories in the real world. Good Sci-Fi is about the characters… much more than the universe created. He is the same friend who made me watch Firefly. Yes, that same sci-fi show that my sci-fi-hating mom loved to watch.

So if you’re not sure you like sci-fi, you can give Firefly a try.

As we see on Moon, it’s almost as if this sci-fi world becomes a character piece in which the main character talks to himself and re-discovers himself in the process. About his daughter, about his wife, about his work. The miniature models are far from the high-end spectrum of regular CGI effects, yet hold this charisma or perhaps it’s nostalgia.

On District 9, what could have been an alien invasion film with explosions where people save the day turns into a film where aliens live in slums among us, as big corporate heads try to find the way to use their bio-technology weapons and think they can get away with it when one of their workers begins changing. The character sort of begins a transformation worthy of Kafka, in which he starts becoming more a “monster,” but in reality human beings are the monsters. It’s sad.

END_OF_DOCUMENT_TOKEN_TO_BE_REPLACED

On the topic of Julz’ last YAM feature about fans and fandoms and the whole idol deal, I saw Julie & Julia this afternoon. It’s been ages since I’ve been to the cinema. First, let me say~~~ Meryl Streep is LURV as Julia Child. I totally cracked up each time she was on screen. I didn’t really care much for Amy Adam’s character, but Adams was lovable.

In the movie, Julie is sort of a very big fan of Julia Child, which reminded me of Julz’ article. She sets out to make all of Child’s recipes in the period of a year, and by the end of the film you see her confronting the idea of her idolized Julia Child version to the real life Julia Child, when she finally says “I don’t ever wanna meet her.” LOL

Wonder how many fans have reached that idea.

I don’t normally go out on Sunday, but I went to the ballet performance of Sleeping Beauty. Meh, I don’t think I’m a ballet person… though it was kinda funny. xD – Many of the dancers had familiar faces xD

Sleeping Beauty… I mean, Aurora was the tinier version of Elizabeth Berkley. then the main fairy was a taller version of Amy Adams xD Then the kitty cat (don’t ask) reminded me of Mena Suvari LOL – let’s see what else… the prince was a whiter version of Ichabod Crane (the Disney version, LOL), and one of the random dancers looked like a guy that works at the family’s restaurant… only skinnier and way younger. Ha!

Then wanted to go for sandwiches, but place was closed so ended up at a restaurant/bistro and had sirloin (? Is that Lomo? Loin? Fillet steak?) with Fungi and Gnocchi~ – Iced tea was crap though. LOL’

Then I’ve been checking my computer for virus (none!) – but I’m too lazy for backups. Ugh! Backups!! I should buy extra harddisk space instead… I asked a few weeks back about a terabyte storage system, but they said they were out. (?) – right. In the meantime, I’m filling it up even more with two Bibi (zhou bichang) films xD. Saw some clips of one of them, and almost died myself laughing. Will tell you how they were…

I know I’m often unkind to dubbing – right?? – but I particularly think Disney does a decent job at doing multilanguage version of their musically-animated films… perhaps not actual full films, but their musical sequences. I was watching a Russian animated short that linked me to the Russian-dubbed version of the Halloween song on The Nightmare Before Christmas.

I particularly think the Russian dub has a lot of personality, and kinda scarier vibe~~~ and, what do you think of the Japanese dub of Halloween? Kore wa HAROUIN~~~ xD

END_OF_DOCUMENT_TOKEN_TO_BE_REPLACED

I found a pretty cool list of photos of actresses ranging from Emily Blunt to Keri Russell, to Scarlett, to Amy Adams… from Evan Rachel Wood to Freida Pinto doing pin-up shoots. Not especifically one shoot, but a collection of different shoots~~

My favorite? Alexis Bledel… tough and badass in this classic~~~ 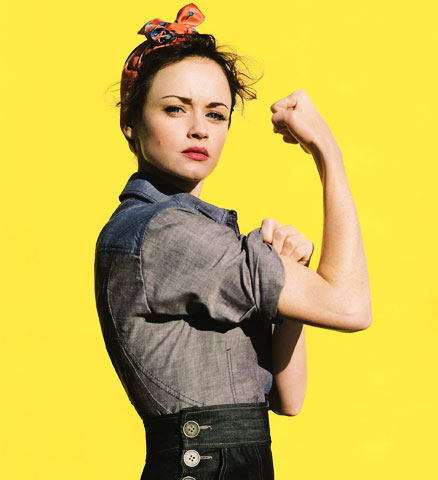 A few other pictures after the break